Provisions in Mexico haven't been entirely different than the US. There are Walmarts and Costcos and a place called Mega that puts my Vons (local grocery) in North Park (San Diego, CA) to shame.

There are a few items difficult to come by.

Wine ... It's expensive and you can't find it in a box here. I had read in Michael Greenwald's book The Cruising Chef Cookbook:

Buy Wine --- plenty of that. It's cheap and available in America, like nowhere else.

I should have loaded up the bilge. But good tequila and rum are very affordable and mixed with V8 splash I feel like it fends off Montazuma's revenge and gives Dave and I a multivitamin boost in one tasty beverage.

Canned or pouches of chicken are sparse. However they have miles of canned tuna in every grocery spot. We did find pouched but spiced shredded chicken that is pretty tasty as long as you are in the mood for Mexican. 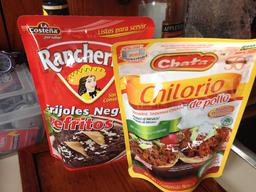 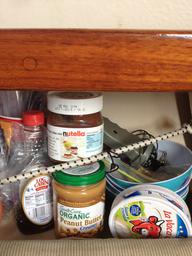 The bakery sections are incredible and there is a tortilleria in every store. They taste so good.

We're off the map a bit now away from the mass market grocers. But they still have everything we could need. And rest assured the 20 peso beers on the beach more than make up for any missed calories (if only). 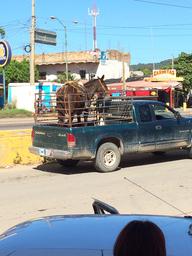 We do eat out, however there are plenty of nights we cook in.
Here are some Mexican inspired Crazy Love (Amor Loco) recipes: 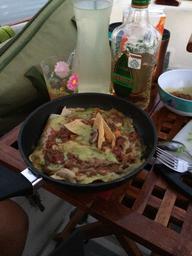 Filling: Sauté the onion and pepper in olive oil for a few minutes. Mix in the chicken and about a cup of refried beans and the red salsa to taste (we like spicy). Heat through.

Use corn tortillas. Fill, add some cheese and roll. Place in the sauté pan. Fitting in as many that fit one layer in the pan.

Pour the green salsa over the top, layer with some of the extra filling if you like, and top with cheese. Heat till the cheese melts over medium heat.

Leftovers can easily be made into chilaquiles the next day for breakfast. What are chilaquiles? Only the best breakfast dish in all of Mexico. Essentially breakfast nachos! Fried corn tortillas, layered with the reheated leftovers and scrambled eggs. 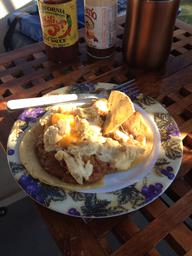 We first saw these at a taco shop in Ensenada. They are a smashed loaded potato. You can get them topped with asada (seasoned beef), chicken, chorizo, cheese...you get my drift. 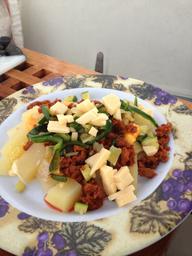 Our aboard version I like to think as slightly healthier mainly with a few added veggies.

Sauté the veggies in butter, season, set aside. Fry the chorizo. Layer the potatoes with the fixings. We used American and a white cheese found at one of the local markets. 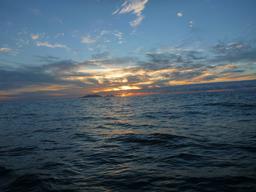 Provisioning success! No refrigeration, no major grocery stops and we ate very well for 3 weeks. The following is my food diary.

On Sunday November 17 we left Half Moon Marina in San Diego after a grocery stop and for a pizza of course. We started this habit at the beginning of our cruising in May. The night or afternoon before heading out on a long voyage we order an extra large pizza and we have excellent leftovers for Day 1 and sometimes Day 2! 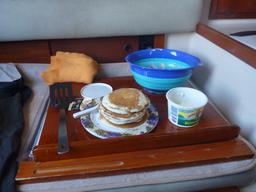 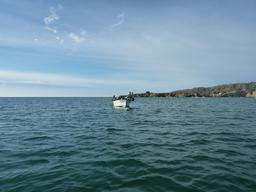 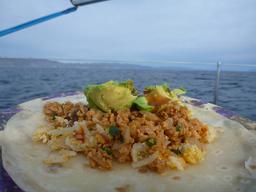 Purchased the following in Turtle Bay: bananas, apples, kiwi, avocado, onion, tortillas, ensenada rolls (or baja buns not sure what they are called but they are a slightly sweet, dense bread roll) 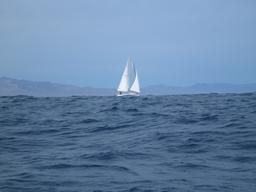 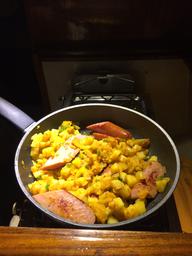 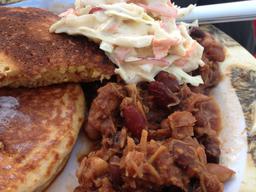 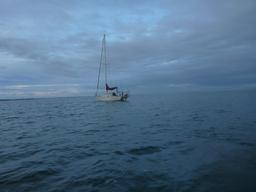 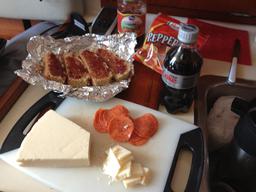 Sat Dec 7 (very rolly through the waves toward Cabo, easy meals were best!)

We arrived Cabo San Lucas on Sunday 12/8. A supermercado is one block from the marina where we can reload on the staples.

Boatmeal= Oats, granola, and dried cranberries mixed with powdered milk and water, sprinkled with cinnamon, nutmeg, sugar or brown sugar. Allow to sit for the oats to soften. Served cold or should we say boat temperature. Recipe courtesy atomvoyages

Eggs= powdered, although now if we choose we can find unrefrigerated fresh eggs here in Mexico

Tuna for breakfast, tuna for lunch, tuna for dinner.... and again 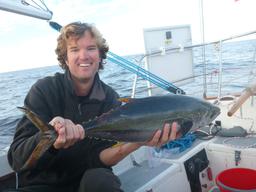 The day before Thanksgiving Dave snagged a tuna on his hand line enroute to Turtle Bay. Our first fish aboard Crazy Love! With respect to the catch, we wanted to waste as little as possible. This is made even more difficult without refrigeration which meant we had an answer to what's for dinner?... and what's for breakfast?... and what's for lunch?

We did our best with the cleaning. We steaked most of the fish and filleted the tail. Even with our hack job we had more tuna than Dave and I could possibly eat.

I was worried about how best to keep the fish the longest and without getting sick. I'm not sure if it was the right thing to do, but I felt it would last longer cooked as opposed to raw. The day of the catch I pan fried all the fish with exception two choice steaks I kept separate for dinner. Pan fried in a little olive oil and all purpose seasoning. 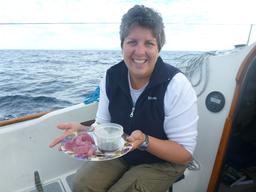 As part of Dave's "fishing kit" he ensured we picked up some wasabi before our departure. A little soy with a little wasabi and he was happy eating sashimi the morning we caught the fish. I must admit it was just a little too early for me to eat raw fish...and the funny thing is I introduced Dave to sushi.

For lunch we had one lone tortilla left in our "pantry". The tortilla warmed with a melted slice of american cheese, piled with the pan fried fish, some shredded cabbage, carrots, ranch dressing, a wedge of lime, and CA chili sauce was delicious! Plenty to share between the two of us. 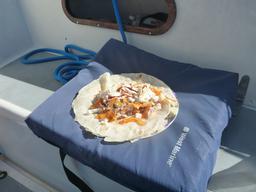 Dinner was simple. Seared tuna steaks with olive oil, salt and pepper and my special stir fry sauce. My intention was to sear these rare, however the pan didn't quite get hot enough and they were a little more done than I would have liked. Very tasty nonetheless. I served some stir fried cabbage and carrots in the same sauce over rice. 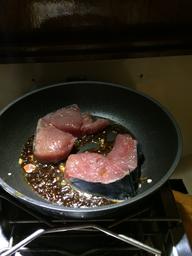 Stir Fry Sauce In equal or almost equal amounts and to taste (I have this pre-mixed in a bottle ready to go): 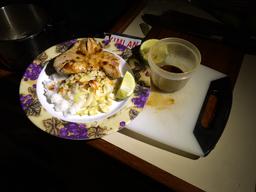 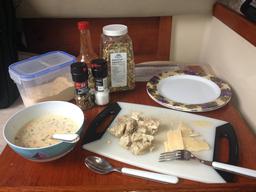 I rehydrated the vegetables in the powder egg mix with water for several minutes. I then cooked the eggs adding the tuna, cheese and seasoning at the end to warm the tuna and melt the cheese.

Pretty simple really. I make this with canned tuna as well. Sandwich bread spread with a little laughing cow cheese wedge (these are sold non-refrigerated and last quite long on the shelf). I mix the tuna with some ranch dressing (thank you hidden valley for selling individual serving sizes), mustard, and some juice of the pickled banana peppers. I threw some of the banana pepper rings on the sandwich as well. Seasoned with all-purpose seasoning and/or salt and pepper.

I had to incorporate the tuna into our Thanksgiving meal! Course 2 it was, and you can find the recipe here.

After two days and six meals... we had our fill.

Thanksgiving Feast on the Crazy Love

I hope everyone had a wonderful Thanksgiving with family and friends. Dave and I were fortunate to be at anchor in Bahía Tortugas.

As a special treat after our 6 day journey I prepared a four course celebratory meal. 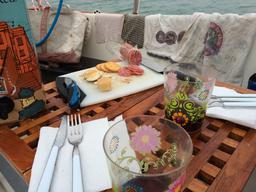 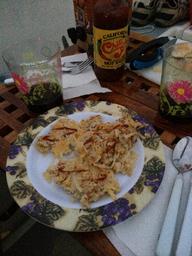 I had cooked up the tuna meat we had left as I thought it would keep better unrefrigerated once cooked as opposed to raw. Combine the cooked tuna, potatoes, egg, onion, mustard and seasoning. Form into cake and roll in corn meal. Brown in olive oil. Serve warm with a little California Chili Sauce ... or hot sauce of your choice.

** If I had real eggs this would have formed better cakes. I should have added a bit of flour to help bind them. They tasted delicious even if they fell apart just a little.

Place the cubed butternut squash, potato, dried vegetables, spices, and salt in the pressure cooker and cover with water. Bring to pressure and cook at pressure 4 minutes before turning the heat off and letting the pressure naturally release.
Then add the remaining ingredients and heat until the soup just begins to simmer.

We had just a little whiskey left on the boat, really just 2 fingers. I thought what better way to enjoy but in an Irish Coffee with just a little warm chocolate goodness. It wasn't pecan or pumpkin pie but it sure tasted good. 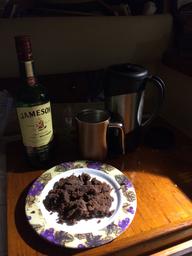 So we made it to Santa Cruz Island, what's for dinner?

I don't typically plan specific meals for specific nights, especially when we are looking at provisioning for more than a week. Rather, I try to stock ingredients that I can mix and match and keep things a little spontaneous in the galley.

Having lots of cabbage, I wasn't sure what to do with it so I turned to Miss Vickie for inspiration. First recipe under cabbage in the index: Colcannon. It is apparently a traditional Irish potato and cabbage casserole. Well we have the cabbage, we have potatoes, and this is what I came up with:

In the pressure cooker, cook the onion and spam in the olive oil till the onions soften and the spam begins to brown. Stir in the cabbage, carrots, and chard with the concentrated chicken stock and water (about 2 cups). Season with a generous amount of Montreal steak seasoning. 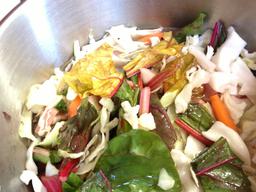 Lock the lid and bring to 15psi for 4 minutes, then allow to naturally release. In the meantime, heat enough water (in the teapot) to reconstitute the hash brown potatoes.

Add the reconstituted potatoes to the pot. Stir in the milk, cream cheese, and sour cream. 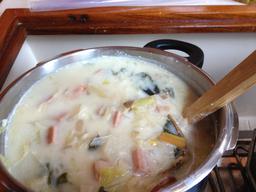 I added in the cream cheese and sour cream because these needed to be used up since they were not refrigerated but they added a nice extra creaminess to this soup-like dish. 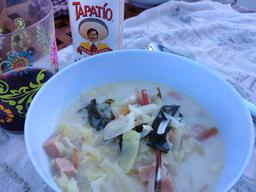 Did you notice I snuck in the spam? Instead of canned meat this dish would be delicious with ham steak, kielbasa, or without the meat and served as a side.

If you don't use spam a bit of salt might be needed.