We're sitting at anchor in Santa Cruz (in 80 degree weather and clear blue skies) after a wild ride South from Half Moon Bay. Our trip North from Santa Cruz to Half Moon Bay took 33 hours. The trip South took less than 12. The 45 mile trip South was an exciting ride...

The day started innocently but would get much crazier. We were anchored at Pillar Point Harbor in Half Moon Bay. I stuck my head out of the cabin at 7:30am to check on things and felt a decent breeze blowing already. Carolyn and I grabbed a quick breakfast, organized the boat, and pulled up the anchor. Outside the harbor we raised full sail in 10 kts of breeze and the boat started to go along nicely, but the wind died as soon as we cleared Pillar Point. We made 2 miles toward Santa Cruz in the first 2 hours, but toward noon the wind built to 10 kts. That got us going a much quicker 4 kts. 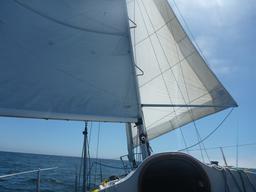 Since we were going dead down wind (directly away from the wind) in light air and calm seas we decided to try wing on wing (see photo). That gave us a great chance to try out our new spinnaker pole. We had the pole installed before we left in May, but have not used it because we've been going upwind for all of the trip thus far.

It took us a few hours to fine tune the trim of the pole and the sail, but once we did, we were hauling! Crazy Love was averaging 5.5 to 6.0 knots and when the waves pushed us along we were touching 6.5 knots.

I should mention how we measure our speed: we have 2 handheld GPS units aboard. Both were included with the boat when we bought it. The one we use most is a Garmin GPSmap 76Cx. It has a color screen that displays our speed and course. It also displays a map with our position. 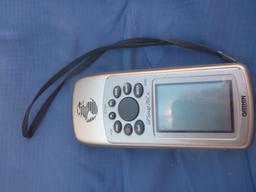 So we're cruising along wing on wing with full sail up and the miles are easy. We peel off 20 miles in just a few hours. Otto, the autopilot, is doing the driving so Carolyn or I just have to keep an eye out for traffic. At about 2pm, we sailed into a thick fog that meant we had to keep an especially close watch: fishing boats seem to come out of nowhere! Fortunately we saw no other boats and the fog lifted a few hours later. 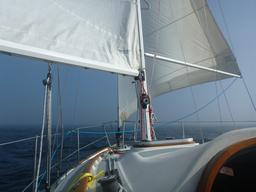 By 5pm we had gone 25 miles with about 20 to go. The wind and the waves started to build - mostly the waves though. Still under full sail, with the jib poled out to windward, Crazy Love was surfing down the backside of waves at 7 knots and even touching 8 and occasionally 9 knots. I'm not sure I believe it, but the GPS says our top speed was 10 knots! That's really flying for a boat as small as ours.

At 6pm we had to turn East toward Santa Cruz which meant we weren't going dead down wind any more. We took the pole down and jibed the jib. In hindsight, I am glad we took down the pole when we did, but we should have put a reef in the main at the same time. The waves only got bigger and bigger after that. Otto couldn't handle the steering load, so I took over for the last 12 miles. Every third or fourth wave sent Crazy Love surfing, nearly out of control. The boat would careen 60 degrees off course, then heel wildly to starboard before righting herself and allowing me to bring her back to course. By this time, we had rolled up the jib half way but still had the full main up with a preventer to keep the boom from slamming about. Note to self: In October, bring all reef lines to the cockpit so we don't have to go to the mast to reduce sail - reefing at this point would have been a terrifying (and dangerous) experience.

To stay in control, we rolled up the jib completely. We still had the full main up, but that didn't seem to be a problem (except that it was). The wind wasn't blowing that hard so a full main didn't cause much heel since we were broad reaching. The issue was the waves - they were getting us very wet. Fortunately we only had 12 miles to go and at 6 knots, those miles went by quickly. After a beautiful sunset, we tucked into the calm anchorage off the beach in Santa Cruz At about 9pm.

We will dry off in Santa Cruz for a few days and then head for Avila beach when the weather is right. Avila, by our count, is about 125 miles away. That will be our longest journey by double. The goal there is to give us a good idea what the longer trips down the coast of Baja California will feel like. After Avila we round Point Conception destined for Santa Cruz Island for a week or so of The Island Life.