The Blue Water Festival comes to the Vava'u group every year and is sponsored by a few marinas in New Zealand. Many boats head south and spend the cyclone season there. They had a full week planned of activities and some helpful seminars. Although we were not planning on heading to New Zealand, the festival was a great distraction as we were waiting for a good weather window to head on to Fiji. Of course the bonus was eating, drinking and having fun with our friends.

Opening night was Monday, October 1 - a local school's brass band began the festivities with great music. This was followed by a buffet dinner at Mangos.

We also took the time earlier in the day and did our pre arrival paperwork for Fiji with Greg at Tropicana. 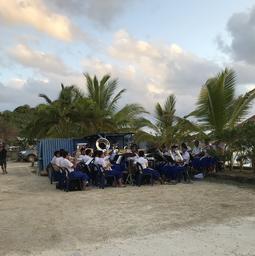 The following day we had breakfast with the Bay of Islands - they offered weather information on the passage to New Zealand, suggested passage routes, and had a few biosecurity officers present to give a briefing on what and what you cannot bring into New Zealand. Most importantly the new regulations on boat bottom cleanings. It's quite strict.

The festival has a race every year and our friends on Zensation were very serious about winning and getting their name on the plaque. They were looking for crew and Dave was happy to volunteer. Not so serious about racing the ladies from Zensation, Aloha, and Love joined forces with the crew on Starlet. Starlet is a motor trawler that has been traveling around the world. Entering under its own category there was a very good chance of winning and it was a fabulous way to view the race. Zensation did in fact come in first place!! The evening ended with a fun BBQ at Basque Tavern. 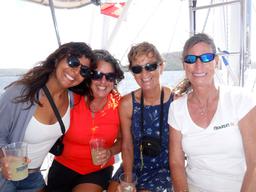 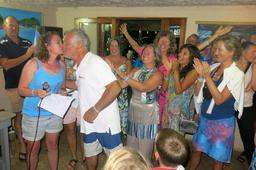 By far my favorite activity during the Blue Water Festival was visiting a local school. The school is set up to help those children who are a bit behind in reading and math skills. The children's family provided a huge feast pot luck for us and the kids put on a great performance. At the end we had fun dancing and playing with the kids. 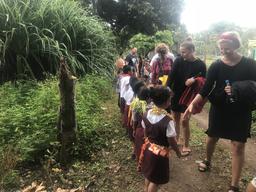 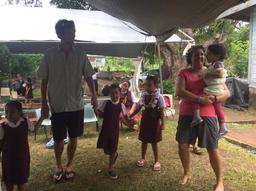 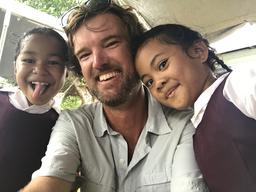 The last day of the festival ended with the typical Friday evening race (these occurred every Friday during cruising season, sponsored by Refuge). Dave once again joined the crew of Zensation. The closing dinner was a delicious Tongan feast followed by dancing and maybe a few tequila shots. 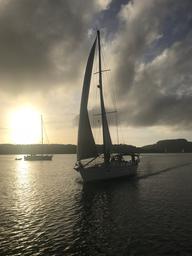 There was one last activity from the festival that the boat yard sponsored on Saturday afternoon. A great sausage sizzle with endless amounts of cold beer.

Now it was the weekend and time to get serious about our onward journey to Fiji. We made market trips and discussed routes with Helen and Jean (Shamata). Had a lovely dinner on Love with Blackie and the Mermaid before getting serious about setting out.

Rosie did final provisions. David fixed a misbehaving sheet winch (thank you Jean for the tools), filled the fuel tank from our single jerry jug, tensioned the alternator belt, and organized.

We're still using the fuel we bought in Hawaii! There's not a lot of awesome things about being on a small boat, but low fuel costs is one of them. A big boat needs a fuel truck to fill up; Crazy Love needs Davey to walk down the street with a 20 liter gas can. We use the motor as little as possible and our engine uses less than a liter per hour, so the fuel we carry (60 liters) lasts a long time. From June to November 2018, we used less than 30 liters.

We stopped at the little blue house boat for our last fish and chips with Bear at Hideaway. 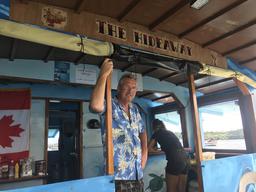 Exit papers were obtained. According to the officials we were leaving Tonga by 4 pm - otherwise we would have had to pay 100 TOP to receive the papers a day early. We said our final goodbyes around town and left Nieafu by 4 pm as promised.

However we just moved on to Anchorage 5. We stowed the dinghy and enjoyed our last night in Tonga as the only boat in this tiny, quiet anchorage, with some skinny dipping in the moonlight.