As Dave mentioned in the previous post we pulled into Nawiliwili Small Boat Harbor in the middle of the night, tied up Crazy Love and awoke to our friend John on Ichiban offering us a cold beverage in welcome.

We planned to stay for a week to enjoy some of the sites on Kauai and perhaps rent a car for a day or two. Hurricanes Iselle and Julio had different plans for us. These two storms seemed to be on a direct path to Hawaii. Since we had a slip we decided to hunker down and wait out the storms, extending our stay for an additional week. 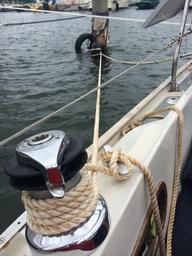 We had great company in the Harbor. In addition to John, we met some other boats waiting to head back across the Pacific to California. Steve and Brian on Frolic, an Islander 36, Christian on Thelonius, and another Brian on Maris, a beautiful Dana 24. Steve had sailed Frolic across on the Single Handed Transpac, coming in first on corrected time. All of these guys had a wealth of knowledge, advice, and great stories. Also around the docks was Dmitry Boldyrev of Winamp fame. Dave was impressed. 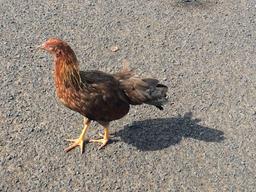 In addition to beer and ice runs (the essentials for any hurricane party), we were able to see some sites, fix our stove, and discover yet another great brewery.

The gimbal on our stove gave out on our passage across, and of course the screw head sheared right off when the repairs began. There must be a machine shop around that could drill it out. Armed with three addresses from Google we set out on foot in search. It seems none of those three businesses were still in business. The one address in fact looked like an abandoned house, scary! We did find the Ace Hardware and were able to essentially rebuild the gimbal (ok Dave was able to rebuild the gimbal). In our walking tour we stumbled upon the Kauai Beer Company, a fairly new brewery. Definitely some tasty brews and the staff was so friendly they convinced us we should return the next night for Tasty Truck Thursday. What a great night. The place was packed with locals and tourists alike. Jim, one of the owners, greeted us and couldn't believe we walked all the way back. He kindly gave us a lift back to the marina at the end of the evening. I love this island!

After walking and walking we decided maybe we could find another of those local rental car companies and rent a car for a few days. Island Rental Cars to the rescue. They only rent by the week, but the cost was unbeatable and they delivered to us! $120, cash only, no hidden fees. This also gave me a little peace of mind knowing we had wheels to get us to higher ground if the storms created unsafe or uncomfortable conditions in the marina. 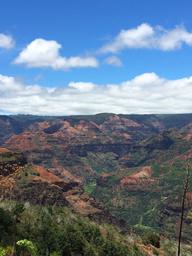 Hidden, at least to folks that travel by boat, on this island is the Grand Canyon of the Pacific. It was a lovely drive through the country to Waimea Canyon and the views were spectacular. We also did some driving up to the North Shore. This island is truly the Garden Isle. Its green and lush with beautiful beaches, not to mention it has some of the friendliest people.

We count ourselves very lucky that Iselle brought one night of rain and Julio turned north and missed the Islands completely!

It was time to send off the boats to California and for us to continue to the much touted Hanalei Bay. Every boater in Hawaii mentions Hanalei and for good reason. 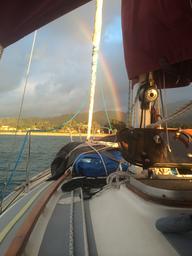 This bay is very protected, has an easy beach landing (even for us!), and access to showers and water. Outdoor showers at the beach, but showers none the less. Next time you see someone at the beach with a bottle of head and shoulders... don't judge!

After our shower we felt passable enough for a tour of the town and a mai tai at Tahiti Nui. We also ran into some friends from the B dock at the Ala Wai. PJ and Rick on Demasiada hosted us for a bay tour, drinks, and dinner on their boat. It was a fun evening, even if I did end up in the water after a failed attempt to board the dinghy. Always have to end the evening with flair! 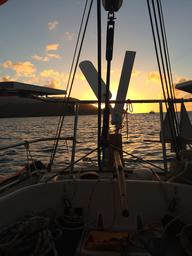 Its the kind of anchorage that you could stay forever, but September brings a north swell making it unsafe. We had been there for a week so it was time to move on to see the famous Na Pali coast. This section of the island can only be seen via boat or helicopter so traveling at 4 knots on Crazy Love was the perfect way to travel. The cliffs and waterfalls are absolutely amazing. 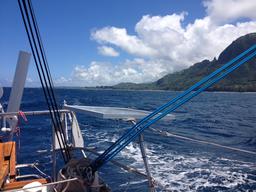 Our cruising guide describes three anchorages along the Na Pali coast. The first anchorage is just 4 miles from Hanalei. It is said to be a protected area behind a reef that curves around to a lagoon at Tunnels Beach. We arrived rather quickly with the wind picking up. We pulled the sails down and motored in to check out the spot. It didn't seem good, we could not determine any calm or protection from the crashing waves over the reef. Abort, abort... moving along to the next anchorage. 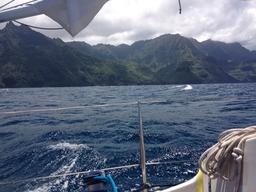 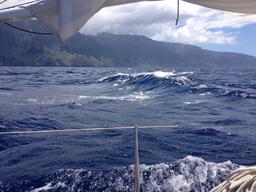 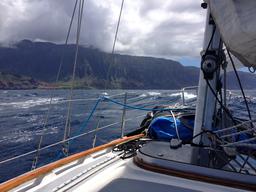 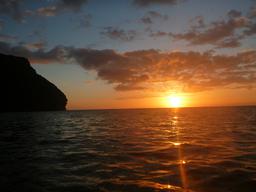 The next anchorage, Nualolo, is a popular spot with charter boats. When we arrived there were a half dozen boats moored in the protection of the reef. Anchoring was tricky because we had to avoid running over snorkeling tourists, avoid dropping the anchor on the reef and avoid the charter boat moorings. Finding a sandy patch was not such an easy trick. The water, although clear, was not completely calm so it was difficult to determine sand versus rock versus coral on the bottom. So I donned my snorkel and fins, jumped overboard to find our spot. I'm sure we were fine entertainment to those on the charters. I did discover a large enough sandy patch directly behind the moored charter boats. Dave was able to drop hook and I made it back on the boat. It seemed to be great holding. The charters left, the sunset cruises finished up and it was just Dave and I on Crazy Love with our new friend Pali. He's a sea turtle. He helped me find the sandy spot and kept us company throughout the evening. The stars with a new moon and a cloudless sky as well as no light pollution can only be truly experienced first hand. We planned to stay for a couple nights at least, but the next day brought some choppy, windy conditions that tripped our anchor and we felt it best to move on. 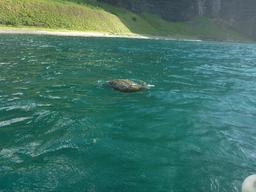 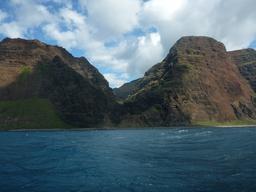 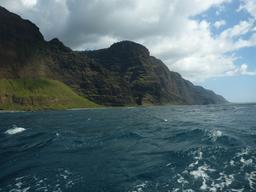 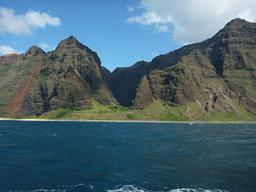 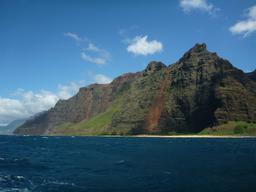 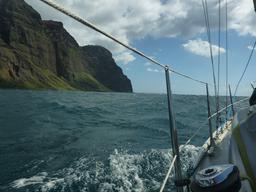 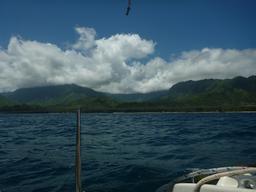 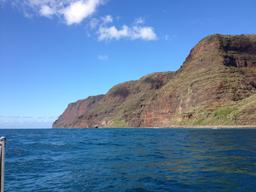 The third anchorage took us to the end of the beautiful cliffs of Na Pali to a white sandy beach that apparently if you get close enough sounds like barking dogs. Barking Sands Beach anchorage was essentially a roadstead of protected, if rolly, water. We were the only anchored boat in the crystal-clear blue water over sandy bottom. We had a frustrating sail, as again our roller furling was not working properly. Dave thought it might be the halyard getting caught on the extrusion (again!) and felt he should climb the mast in the rolly anchorage. The fix unfortunately didn't seem to work so we motored the 20 miles into Port Allen with only our main sail. 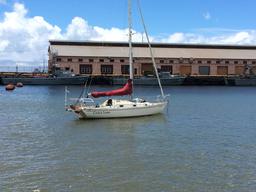 I had spoken to the Port Allen harbormaster and she said we could anchor within Hanapepe Bay for 72 hours if she didn't have a slip. We arrived of course on the weekend so even if she had a slip, the office was closed. After consulting the guide we decided the most protected area was just outside the second breakwater. Our only concern was it was a tiny space between the Small Boat Harbor entrance and three small Navy ships moored on the other side. We anchored fore-and-aft to keep the boat from swinging out into the channel and no one on the Navy ships complained so we felt we were OK. I believe we were at least 100 yards away.

It was an easy row into the facilities where they had brand new bathrooms and yet another outdoor shower. Less than a block away another brewery, Kauai Island Brewery & Grill was our first stop. Dave went up the mast again the next morning and unfortunately discovered a compromised forestay. It seems one of the strands of the wire rope had frayed. This was not good and we had no idea how long it had been like that. Perhaps this might explain the underlying troubles we've had with the roller furling all along. We couldn't believe it, it was a new rig after all and certainly not expected. After an afternoon of delicious food and WIFI at Grinds we decided instead of stopping at a few more anchorages on the west side of Oahu we should head back to the Ala Wai. The weather window for passage back across the Kauai channel was looking good, 10 knots from the east, northeast up to 15 knots with 3-5 foot wind waves. We headed out of Port Allen even sooner than we were planning as when we returned to the boat it looked like it was time to re-anchor or head out (the boat just seemed closer to those rocks). We headed out under power hoping to make it around the point to cross the channel. It was slow going so we then decided maybe a stopover in Nawilwili, then the wind picked up a little and we didn't stop. On to the Ala Wai, back to Honolulu. We motored a lot as we didn't want to add any strain to the forestay, only sailing in the lightest of winds. It was a long journey, hand steering switching 2 hours on and off, but we made it into the Ala Wai by Monday morning, about 4 am. We were assigned a slip, wait for it... right next to our buddy on Ichiban!

This is it. The end of this cruise is near. We are working on getting a permanent slip at Ke'ehi Marine Center, one of the 3 private mooring facilities in the state. Fingers crossed, we'll be moving Crazy Love to her permanent slip sometime before my birthday.