A Tale of Three Sails

After 18 days of busy city life in Honolulu we were ready to see the other side of Oahu. On Tuesday, July 22nd we left Ala Wai Harbor headed for Kaneohe Bay, a run that could be, should be, might be 30 miles. The wind was 15-20 knots from the east with big waves also from the east. Our path to Kaneohe had us going directly east for about 5 miles until we could crack off and reach around the windward side of Oahu. It was the hardest five miles I've ever sailed. Crossing from Puerto Vallarta to Hilo was easy in comparison. The east waves broke over the bow and the occasional south wave broke over the beam. All these waves soaked Carolyn and I for the better part of 8 hours. 8 hours! To do five miles! Ugh. Its hard to think about it now because I was so sea sick. I've never been that sea sick before. It was a miserable experience.

Once we got around the corner (Makapu'u Point), things got much easier. The wind was on the beam. The waves were on the beam or behind us and our boat speed increased tremendously. We went from averaging 2-3 knots upwind to 5-7 reaching. It was less miserable, but sunset was upon us with 15 miles to go. 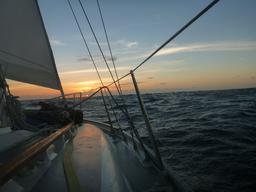 We ended up motoring into Kaneohe Bay in the pitch black. It isn't a good idea to enter a harbor for the first time at night, but we were so tired we took a chance. Working for us is the fact that Kaneohe has a Marine air station, so we were willing to take a chance on the accuracy of our digital charts. Turns out the charts are extremely accurate - even on the Garmin. The navigation bouys, both lit and unlit, were positioned in real life exactly where the charts said they would be. The depths were also accurate on the digital charts so we were able to follow the depth sounder all the way into the anchorage and drop the hook in a great spot.

The average speed surprises me because it felt like we were barely moving during the zig/zag portion of the trip around the east end of the island.

We stayed in Kaneohe for 4 days to recover from the rough passage. We didn't even get off the boat. It was relaxing after the craziness of Honolulu and the beating we took getting there. 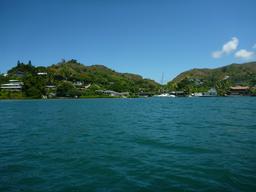 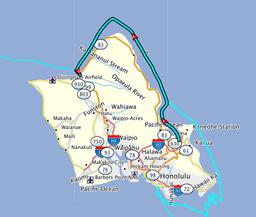 Our original plan for Oahu did not include a stop in Haleiwa, but our friend John, on Ichiban, recommended we stop there for a great burger and the general funkiness of the town. 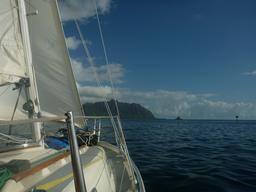 The trip to Kaneohe turned out to be painful, so we needed a smooth downwind leg and we got it on the way Haleiwa. We motored out of the channel to perfect 15 knot easterlies. Broad reaching on starboard tack got us north of Kahuku Point and a perfectly timed gybe took us right into Haleiwa. We arrived on the sunny North Shore of Oahu happy and in love with sailing again. 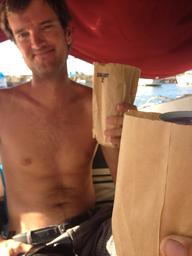 Inside the small boat harbor we tied up to the loading dock. We stayed there for two days and met all kinds of interesting folks: charter fishermen, tourist boat crews, and a homeless guy with a dog named either Salty or Shorty (depending on how drunk he was). 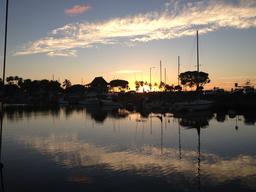 When we were planning to leave Monday morning we stopped at the harbormaster's office to say hello and see if we owed anything for our stay - as transients we're willing to pay our share to improve the facilities for future cruisers. Mark, the temporary harbormaster, usually works in Kaneohe, but is in Haleiwa for a few hours on Mondays and Tuesdays. We caught him just as he was arriving. Lucky timing! Mark called ahead to our next destination to get us a slip reservation in Nawiliwili Small Boat Harbor. It was really awesome of Mark to make that call for us because we arrived at Nawiliwili in the middle of the night. 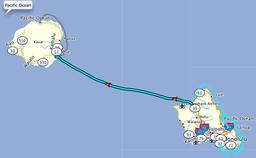 This is the sailing that's only supposed to happen in dreams. Perfect breeze, broad reaching at 6 knots, surfing down waves, and amazing stars - there's nothing more I can ask for.

We planned on a 20 hour trip to Kauai so we left Haleiwa at noon, thinking we would arrive mid-morning. It didn't work out that way because we went faster than we've ever gone before. Doing 7-8 knots on Crazy Love usually feels out of control (its a 26 foot boat), but on this particular sail it didn't; the WindPilot steered us perfectly leaving Rosie and I to enjoy the wind, sunset and stars. We arrived in Nawiliwili at about 1am and pulled into our slip a little before two. Since we arrived so early, it was really great that Mark had called ahead for us to get a slip assignment - #212. 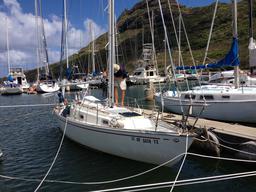 When we woke in the morning, we realized we were right next to Ichiban. Wow! We've been getting a lot of local knowledge from him via email and have been wanting to meet up. Turns out we didn't even have to plan it.

We were docked there for two weeks while we waited out hurricanes Iselle and Julio but we'll leave that bit of fun for later.