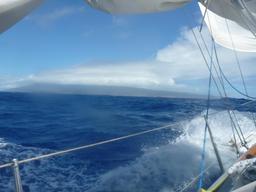 After five days at anchor in Honolua Bay, we headed around the east end of Molokai via the Pailolo Channel. This was a sporty crossing - 15+ kt winds with 5-8ft waves - but nothing like the Alenuihaha Channel. It was easier mostly because we did this crossing first thing in the morning rather than in the middle of the night. The crossing itself was less than 10 miles. When we rounded Cape Halawa we were able to ease the sheets and fall off the wind. Then the beautiful sailing happened.

The north shore of Molokai has the highest sea cliffs on this planet - so we are told. The truth doesn't matter because they are unbelievably tall even from several miles offshore. 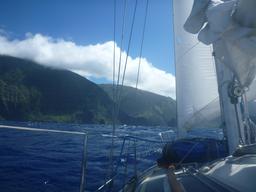 Molokai has strict rules about going ashore. Basically they don't want haoles (that's us) coming ashore except in places where they can watch us. 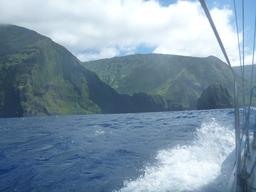 About half way along the north shore is a high island a few hundred yards off the steep-to shore. The cruising guide says the lee of this island is a good anchorage. We had a hard time getting the hook to set in the sand bottom, but when we did it felt safe enough. 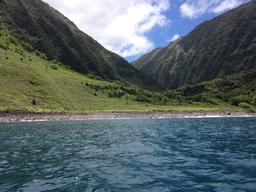 Matt and Rachel on Aeoli joined us in the anchorage a few hours after we arrived. We had dinner, Rosie's Indian curry, aboard Aeoli the following night. Yummy stuff.

The morning after our dinner party the oddest thing happened. The wind started blowing out of the West. "The west?" you ask. Yeah the west. My theory is that the east wind hits the cliffs and wraps around into the little corner where we were anchored. It was blowing so hard the boat was heeling at anchor and spray was blowing into the cockpit - the Beaufort scale suggests the wind was around 30 knots. Fortunately the anchor held long enough for us to get the kayak out of the water and escape for a calmer spot.

The calmer spot was only three miles away. We anchored about a quarter mile off the beach bordering the former leper colony. There's still a substantial town here despite no road access. I wonder, how do they get building materials here? How do they make a living? We didn't get to find out because we weren't allowed ashore. We didn't try to go ashore, but we assumed we weren't welcome based on advise in the cruising guide.

We stayed two days here. Didn't get off the boat. We read, played games, and enjoyed the sunshine.

Upon leaving Kalaupapa, heading west, we had some groovy sailing. The wind was 10-15 from the east, so we moved quickly to the Papohaku Roadstead at the west end of Molokai. We had a hell of a time finding a sandy patch to drop the anchor. The sea floor here has a lot of rocks and coral. The sandy patches tend to be just a few inches deep with a rocks underneath. We stayed here two days after we finally found a deep enough sandy patch to set the anchor. 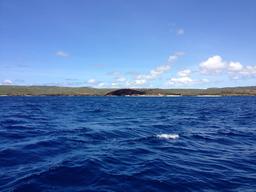 There's a resort on the beach. It appears to be maintained, but there were not many people around. We didn't go ashore here either. Didn't even pump up the dinghy. I did attempt a little spearfishing. Its harder than it looks. My aim is not good. 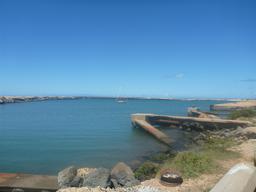 This unused little harbor is well protected from the wind and the waves. Apparently it was built in the 50's to load sand onto barges for transport to Waikiki. This practice was outlawed in the 70's, so the harbor is unused today. We did land the dinghy here, but there's not much to see. We took a walk on the beach, but mostly hung on the boat waging war against a number of bees before bashing our way over to Lanai. 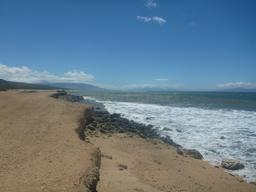 The wind blew like crazy the entire trip from Lono to Lanai. It was a wet and wild upwind sail all 20 miles over to Lanai. We expected that we'd get calmer winds after crossing Kalohi Channel, but even in the lee of Lanai the wind blew like crazy. We tucked into the little Kalama Nui Cove and anchored in 25 feet. The holding here was excellent with a black sand bottom that got along very well with our 7.5kg bruce.

Good snorkeling here. Lots of small aquarium fish and some larger parrotfish and orange spined tangs. I even saw a sea turtle and a shark. Sorry to say I didn't have the camera for those sightings. I tried quite a bit more spearfishing. There was lots to shoot at but I still couldn't hit anything. I'll keep practicing, I promise. 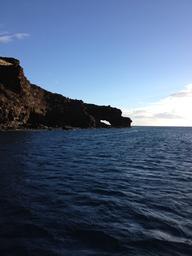 About six miles from Kalama Nui, as the crow flies, is Manele Small Boat Harbor. The wind was dead the morning we made this short trip, so we motored for three hours to get there before lunch. We anchored for two days outside the harbor, and then spent three days in a slip after we spoke to some folks familiar with the harbor. 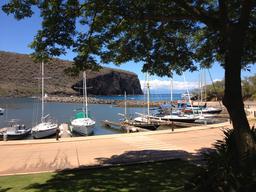 Manele Bay might be our favorite spot in the whole state. The harbor is clean, uncrowded, unbelievably quiet and perpetually sunny. A half mile walk from the boat took us to a beautiful beach and there is a Four Seasons resort a short walk from the beach. The perfect spot to watch some world class soccer. 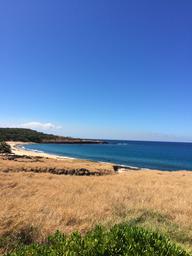 The sail from Manele Bay to Honolulu was a bit frustrating. It should have been dreamy downwind sailing, but the roller furling jammed again, so we couldn't use the jib. Ugh! Without the jib, we can't balance the sails enough to use the windvane. That means hand steering. Double ugh! I don't mind steering by hand, I just don't want to do it in the middle of the night. On the upside, the roller furling didn't completely fail until we were 25 miles outside of Honolulu so the hand steering was only for the last 6 hours of the trip.

We arrived at Diamond Head and Waikiki Beach at about midnight, so we had some time to kill before dawn. With the jib jammed, we couldn't even heave to. Shucks! We dropped the main and floated. The wind and waves pushed us offshore so we motored in shore a few times during the night. After dawn, we called the harbormaster's office for instructions... 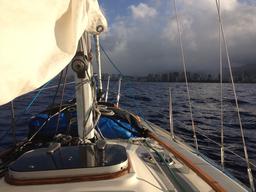 More in the Honolulu entry.