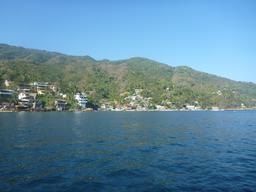 We left the San Blas marina without incident by keeping the green bouys (next to the fuel dock) on our right. That kept us in the deep water - or at least deep enough for Crazy Love to pass. It was low tide so the area we'd run aground on was exposed.

After reaching the end of the breakwater, and passing the oft breaking waves, we set the full main, and unrolled the jib. It was 11am and there was already a moderate breeze. The destination in our GPS was the anchorage at Punta Mita - about 48 miles. We moved quickly until 6pm when the wind died. Before we left San Blas, we decided that we'd sail through the night even if we were just floating. At 1am the breeze picked up just enough to get the boat going again, but it was slow going all night. We got some nice sleep because the seas were flat calm. It was like sleeping on a waterbed - no rolling, just the gentle motion of the boat.

In the morning, we had 10 or 12 miles to go to Banderas Bay. By 11am, the sea breeze started blowing which doubled our boat speed to 4 knots. We arrived in the anchorage at lunch time and spent the rest of the afternoon preparing for a trip to San Diego that would happen after we returned to La Cruz. We stayed the night at Punta Mita for a little rest before the day sail to Yelapa the following day.

The next morning the sea breeze again started blowing after breakfast. We set the main and pulled up the anchor at the same time and safely sailed out of the anchorage. I like not having to use the diesel to exit an anchorage. Its so much quieter without. We broad reached (occasionally running) towards Yelapa at 4 knots. When we got closer, we noticed the water was a brownish color and there were thousands of jellyfish. We're not biologists, but we assumed it was the red tide. When we got to within 4 miles, the wind died so we ruined our zen for the day by turning on the engine. As soon as we got the sails down, a panga approached. The driver (panguero) offered us a mooring ball. We accepted and paid 400 pesos for our two nights.

We were told there are a few places to anchor in the little cove that is Yelapa, but that those spots are very close to shore due to a deep channel in the middle of the cove. Our mooring ball was less than 200 feet from shore, but the water was still more than 100 feet deep. That's much different than every other beach we've experienced in Banderas Bay. Most of them are only 30 or 50 feet deep within a few miles of shore.

After we tied up and paid, we pumped up Peeps. It was the last time we'll use him aboard Crazy Love. Our plan was to replace him and that's exactly what we did - we now have a smaller, lighter 2-person inflatable kayak.

We rowed ashore, successfully landed on the insanely steep beach in light surf, and had ourselves a few cold Pacificos at a palapa restaurant. Turned out to be a beautiful afternoon.

When the restaurant closed we walked over to the other side of town. I suppose I should stop to explain "town." There are two sides to Yelapa - the beach and town. The beach is the center of activity until 5pm and then everything moves to town. The restaurants, music, nightlife, and several hotels are in town. We grabbed a bite for dinner in a place with a view of the water (I can never get enough of that view) and then went back to the boat. 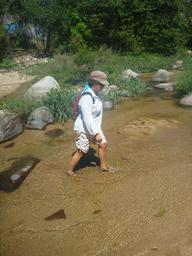 In the morning, we hiked to one of the two waterfalls outside of town. On the two hour hike we got to see where the locals live and plenty of roosters. 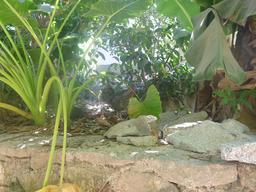 After the hike we stayed on the beach for some lunch in one of the palapa restaurants on the beach.

Back on the boat mid-afternoon, it was already time to prepare for the trip back to La Cruz.

The 16 mile sail back to La Cruz was the best day sail ever. Crazy Love was broad reaching at 6 to 7 knots in 15 knots of breeze with gusts to 20.

Now we prepare for the crossing to Hawaii. Extremely excited is an understatement.