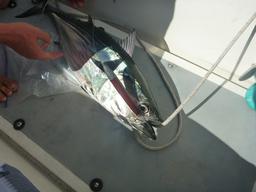 The 40 mile course from Isla Isabela to San Blas is just south of east. I never saw anything deeper than 125 feet on the depth sounder, so I thought there might be some good fishing. I threw the handline over the side and two hours later, in 80 feet of water, we caught a 25 inch skipjack tuna. We've heard other fishermen throw skipjacks back. We didn't. It was good eating. 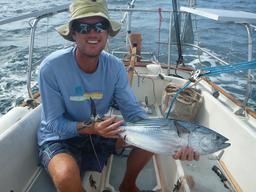 The sailing was slow except for a nice breeze in the mid afternoon when we were able to do 5 knots. At sunset, we still had 12 miles to go, so we decided to go into the large anchorage south of San Blas called Matanchén. We arrived there at about 10pm.

In the morning we raised the sails, pulled up the anchor and blasted our way three miles up the coast to the entrance to the estuary leading to the marina. On our final turn before the marina I failed to notice the green cans floating next to the fuel dock. Green navigation bouys should be left to port, but we left them to starboard. From the fuel dock, the workers were waving at us like they were trying to get our business. We waved them off and then the boat stopped and we felt an unfamiliar bump. Hmm. We'd run aground. Turns out the nice guys on the fuel dock were trying to tell us that we were approaching a shoal and would soon run out of water.

The nice thing about having a small, slow boat with a full keel is that groundings aren't fatal. Neither the rudder or prop are exposed to danger because the boat sits very nicely on the full length keel. That keeps the rudder and prop off the ground and out of danger. A nice side effect of having the rudder and prop off the ground is that we can still use them. With Carolyn at the tiller and the engine in reverse I went to the shrouds and swung off the side of the boat to get it to heel a little. After three swings we were off the shoal and floating in 5 feet of water again.

Try that on a big boat! Hah.

It was only another 200 yards into the marina where we had help from two amused marina workers. My theory is that making fools of ourselves and keeping our cool earned us a bit of respect because everyone seemed to remember us for the three days we spent there.

After checking in and paying the bill (only 395 pesos for 3 nights!), our first order of business was a shower. All the snorkeling at Isla Isabela left us with some salty hair so a rinse off before lunch felt civilized. We had a great lunch in the town square about a mile walk from the marina.

The conventional wisdom in San Blas is that the bugs (jejenes and mosquitos) are unbearable around sunrise and sunset. That gave us the perfect time to try our mosquito netting donated to Crazy Love by our cruising friends Carter and Anita. It worked beautifully. We each had one bite during our whole visit - less than any other city we've visited in Mexico.

All three nights in San Blas we stopped at the San Blas Social Club. Its the gringo hangout in the town square. The bugs, or the threat of them, have scared away many. The gringos we did meet were very friendly and welcoming. We visited at the end of the season, meaning most have gone north to Canada or the States. 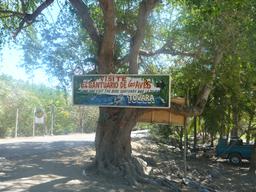 On our first full day we took a jungle tour by panga. We saw mangroves, crocodiles, turtles, and lots of birds. 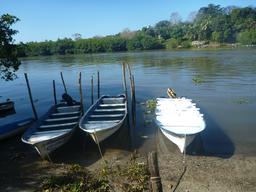 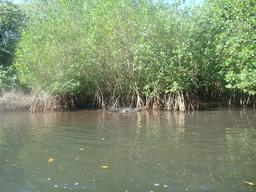 On our second day, walking in the same direction as the jungle tour, we walked up a short hill to the long dilapidated church and fort. Interesting bits of history. 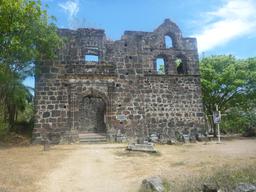 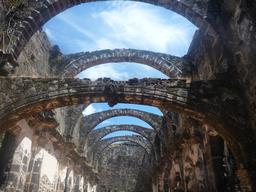 That night we stopped for a drink at the social club, had a hot dog from a street vendor and then some tacos from a little store down the street. It was a quiet final evening in San Blas spent people watching in the town square.

Maybe we got lucky with the bugs, but Carolyn and I really enjoyed our stay in San Blas. We would recommend the stop to any other cruisers and urge them to "Use the bug nets Luke!"

After leaving San Blas the plan is to head down to Punta Mita and then to Yelapa. Our time in Mexico is quickly coming to a close. Hurricane season is approaching and cruisers are making themselves scarse. We will do the same after a few more stops.