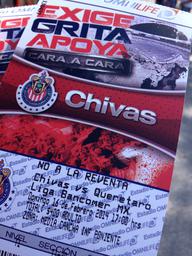 After lunch on Valentine's Day Rosie and I sat in the marina lounge with nothing much to do. She did a little research on the internet and found out that Chivas was playing at home in Guadalaraja two days later. We make a habit of catching a soccer game in every country we visit, so we decided we'd have a little weekend side trip.

The following morning we borrowed a Lonely Planet travel guide, packed a backpack, and headed to the bus station. The local bus took us from La Cruz to the airport for less than $4US. A mile walk brought us to the long haul bus terminal - very nice place, comparable to an airport in the US. $160 got us two first class roundtrip tickets aboard an ETN bus to Guadalajara. We were on our way! 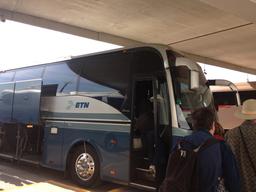 This was a posh bus. There were 24 seats, three per row, with two restrooms in the back. It was more comfortable than the time I flew first class. The legroom was almost enough to let me straighten my legs and the seat was tall enough that I could sit up and still have something to rest my head against (to rest my head on an airplane, I tilt my chin up so that I'm looking straight up). Each seat had a T.V. with a bunch of on-demand sort of stuff to watch. The bus even had WiFi. I was happy just sitting in the comfy seat staring out the window at the countryside.

Five and half hours later we arrived at Guadalajara's Nueva Central Camionera. We boarded a local bus labeled 'Centro' to take us to the Historical Center of town. We didn't make hotel reservations and the hotel we wanted to stay in was full so we had to walk around town for an hour before we saw one we liked - Gran Hotel Los Reyes. The hotel wasn't too expensive and the room was decent but the neighborhood wasn't very friendly at night. If we visit again we'll stay in a different part of town. 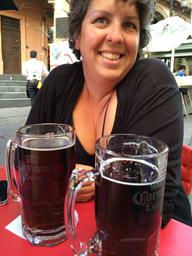 The following day was devoted to getting from the hotel to Estadio Omnilife, the home of Chivas. The game was at 5pm and we left the hotel at 10am. The travel guide said we could take an electric bus to the stadium, but the streets were closed to cars for much of the day to allow cyclists and runners to do their thing in safety. Bummer. 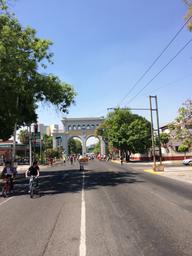 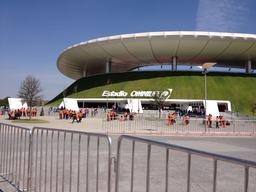 The hotel was 11 miles from the stadium and we walked about 7 of it. For lunch we had Chinese in the food court of a ritzy mall and then took an inexpensive taxi the rest of the way to the stadium. We got some really good tickets for 400 pesos each and walked into the stadium 90 minutes before the game. 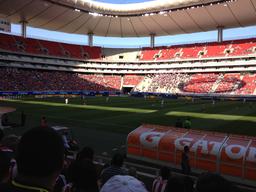 Chivas won 2-1 over Queretaro. Besides the fact that the game was soccer and the language spanish the experience was much like going to an American sporting event. A 24oz Tecate Light was 75 pesos and I didn't have to get out of my seat to get a refill. The stadium and the parking lot were cleaner than the few times I've been to Qualcomm Stadium. There were no flares at this game unlike the game we went to in Livorno a few years ago.

After the game we took a taxi back to Centro for dinner, beer, a few rounds of tequila and finally bed. In the morning we got on yet another bus back to Nueva Central Camionera and then it was 5 hours back to Puerto Vallarta.

This little two day adventure was a blast. We didn't see any gringos at the game or in town so we feel like it was a rather authentic experience. It will likely be our only stop in "real" Mexico this year, but we'd like to go back and explore more on another trip.