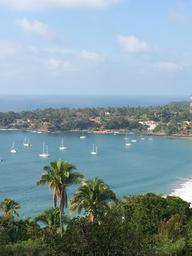 When we pulled up our anchors this morning in Chacala we discovered there was a substantial amount of 'gunk' growing on the line. The smell of the gunk reminded me of the lockerroom in middle school. Remember that smell? Most of the guys at my middle school didn't wash their gym shorts for months at a time and their shoes never got cleaned. The sweaty, unwashed clothing would fester in a pile at the bottom of the locker and emit an oh-so-appetizing stench. If you've got that scent in your nose, now you know what our anchor rode smelled like this morning. I piled the stern anchor rode in the cockpit hoping the sun would dry it out.

Crazy Love motored South in flat calm seas for three hours to Guayabitos for a quick stop before heading back to Banderas Bay.

In the late afternoon, we rowed ashore to crash a dinner party. Dinner was at Latitude 21. All-you-can-eat rib night was a hit - if you didn't have a reservation (we didn't) there wasn't a table available. Will talked the restaurant into tacking the three of us onto the end of his friends' reservation for 8. Dinner gave us a chance to meet some lovely folks and learn how to read the telltales on our genoa.

First thing in the morning we had a visitor aboard Crazy Love. One of the Canadians from the crashed dinner party last night (his name is Will too) came out in a kayak to trade his symmetrical spinnaker for our asymmetrical. He showed us how to rig, hoist, and douse the sail. It turned out to be a great learning experience.

That evening, Carolyn, Will (of S/V Thalassi), and I had dinner on the beach. It was red snapper (the whole fish), rice, and salad. I had never had the whole-fish-with-eyes-staring-back-at-me experience. The fish was great - cooked perfectly, the meat fell off the bones and the fish didn't wink at me once. 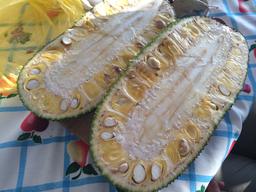 After dinner we went to [what can only be described as] a retirement home Gone Wild party. Karaoke by the pool with a swim up bar and a busy dance floor made for interesting people watching. Not counting the hotel staff, there were only a handful of partiers less than twice my age. I heard rumors that several of the ladies dancing up a storm were pushing 90. Good for them.

Our trip down to Punta Mita was one of the best day sails we've ever had. The wind was light and variable so we made plenty of sail adjustments, but the boat was always making at least three knots. We dropped anchor just East of Punta Mita right after sunset. The 25nm (or so) trip took about eight hours.

The best part of this trip was the whale watching. In the early afternoon, we saw two whale tails slapping the water about a mile ahead of us. As we got closer, the two whale tails turned into four whale fins slapping the water. One of the whales was bigger than the other so Rosie guessed it was mom and baby. After the fin slapping stopped the jumping started. Both whales jumped clear out of the water at the same time. The closest jump was less than 200 yards away from us. We didn't bother with the camera but I'll describe it as Better than Sea World. 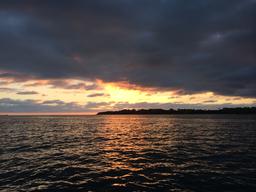 Two days at anchor. Very relaxing. Lots and lots of Carcassonne on the iPad.

A North breeze in the anchorage at 9am seemed to suggest we could sail the 8nm into La Cruz de Huanacaxtle. After one mile, and another whale sighting, the wind quit and we floated. Our oh-so-quiet Yanmar 1GM10 got us the rest of the way into the beautiful Marina Riviera Nayarit at La Cruz. 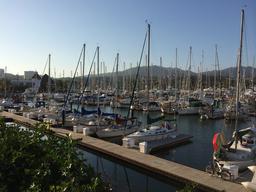 The cold shower - first in three weeks - after checking in with the marina was not disappointing. Time for some marina living! We've heard good things about La Cruz. A first look suggests it has a lot to offer. Plenty of restaurants to try and live music every night of the week.