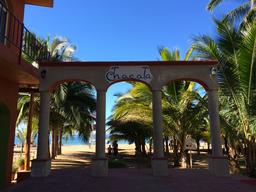 We're still in Chacala 12 days later. The life here is too nice to leave. Every morning we wake slowly, reading in our sleeping bags until we're hungry. We make a slow breakfast while we wait for the sun to warm us up - not that we were cold to start with. When we're sufficiently warm, we jump in the water and swim to the beach. Some days we take a walk, other days we swim right back to the boat. After drying in the sun on the bow, we consider lunch. Lunch is usually on the boat. Something simple like grilled hotdogs (salchichas) and poblanos on a tortilla with spicy mustard. After the lunch dishes are put away, we read and talk until its time to row to shore.

The dinghy landing in Chacala is straight forward. No worrying about surf landings or flipped boats. We row until we feel Peeps hit the sand and step out into ankle deep water; we pull him up the narrow beach and tie the painter to the rocks ashore. Several times I've scared away large iguanas sunning themselves on the rocks where we tie the painter. 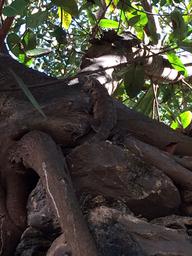 A ten minute walk on a dirt path gets us to the beach lined with 8 or so restaurants. We have frequented Las Brisas and Choc Mool. Both have good WiFi (pronounced wee-fee) and cold Pacifico. The management doesn't mind if we sit there until closing time. One concern we have is how we appear to the other tourists in town: we're sitting on a beautiful beach with amazing scenery and we've got our noses buried in our iPads and laptops. I will never be immune to a beautiful sunset, but even in paradise I want to check my email. 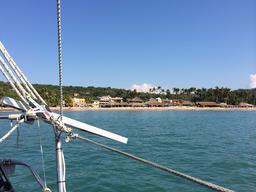 After a few rounds of Pacifico and some work online, the sun has usually started its decent toward the horizon. Lazy days move quickly in Chacala. Dinner has been a mix of on-the-boat and in-town. One night we had pizza ashore, another night Rosie made chili for boardgame night with our friends aboard the S/V Lilo (pronounced lie-low).

After dinner we row back to the boat and read or chat until bed. You'd think Rosie and I would be bored of talking to each other after living in such close quarters for the last 8 months, but we still have plenty to talk about. The last few weeks, we've talked a lot about our plans for the next three to six months. I updated Our Plan with our current thinking. Right now, we're pretty sure we'll attempt the crossing to Hawaii in April. Three days ago, I was sure we were going to summer over in the Sea of Cortez. Three days before that, I was sure we were going to Central America. The plan changes frequently.

The short term plan is to stay here until sometime next week. Then we'll head back to Banderas Bay, specifically La Cruz, to build a new tender for Crazy Love. Peeps is having more trouble than ever. We're in search of a plan for a plywood dink that will fit on our bow. This is no easy task as there isn't much room on the bow of a 26 footer when we consider that the chain locker and side decks eat up much of the space available forward of the mast. With the generous help of the experienced boat builders aboard Lilo, the new dink will take a week, more or less, depending on the complexity of the plan we choose.

After building the new dink, we'll explore Banderas Bay until we have friends and family join us in early March. We don't have any plans to go South of Banderas Bay. Bahia Chamela, Z-Town, and Acapulco will still be there when we return in the future. Instead of heading South, we will prepare for the puddle jump.