On Saturday, Rosie and I threw off the dock lines and headed North for the first time since we left San Francisco this summer. Going North in Mexico's winter hasn't been as difficult as it was in California's summer. The sun is much warmer and the wind, for this trip at least, is favorable. 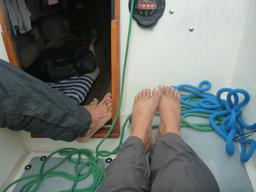 We left the marina early to take advantage of the East breeze in the morning. Crazy Love ran at four and a half knots under jib alone; the main stayed lashed to the boom. We had some rain a few miles outside the marina breakwater, so we dug out our foul weather gear for the first time in a long time. Even though we were wearing our waterproof jackets, we still didn't put shoes on. I don't think either of us have needed real shoes since we got to Mexico in mid-November. Our goal for the day was to anchor South of Punta Mita, but we made such good time we decided to continue North to Sayulita. Wouldn't you know it, as soon as we rounded Punta Mita the wind died so we motored the next few miles and set the hook down a few hours before sunset. 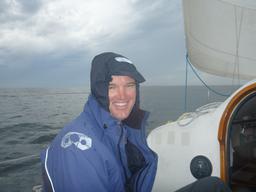 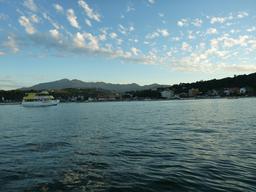 After a hot, sleepless, rolling night at anchor in Saylita, we picked up the hook and headed for Guayabitos. The shallow anchorage at Rincon de Guayabitos - we were anchored in 9 feet of water - didn't have as much swell, so the boat rolled less. A better night's sleep was had by all. Guayabitos is a resort town for Mexicans. The beach is lined with restaurants and beach clubs, but the mega resorts of Nuevo Vallarta are nowhere to be found. We only planned to stay the night, so we did not go ashore, but we look forward to returning for a shore excursion.

From Guayabitos, we had less than 9 miles to Chacala. I woke at 4am to check the conditions and they were perfect. The wind was blowing 10 knots from the Southeast. Did I get up and get the boat moving? Of course not. There are a few reasons I didn't pull up the anchor right away:

Back to bed I went. When I got up a a few hours later, after sunrise, the south wind was still blowing, but it was dying as it does every morning. I prepared the boat to sail anyway: clean up last night's dishes, secure the dinghy, and pull up the anchor. By the time I unfurled the jib, the wind was so light it wouldn't fill the sail. Bummer. Looks like we'd be motoring the rest of the way to paradise.

In no time at all we were there and Will rowed over to welcome us. He gave us the lay of the land and suggested we move the boat closer to the dinghy landing area. It is a good thing we moved closer to the landing; Peeps isn't holding air so well these days. We might be able to row for 30 minutes before we start taking water over the side. Crazy Love will need a new tender before long.

Despite the dinghy difficulty, Chacala really is paradise. Will didn't need to hedge his bet when he told us that we wouldn't be disappointed. 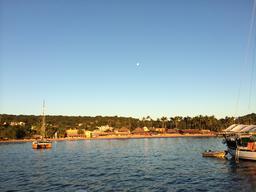 When we checked in with the Port Captain, we told him we'd be staying a week. Maybe we'll stay longer. The beach is gorgeous, the swimming is great, and the first sunset, right now, is EPIC. 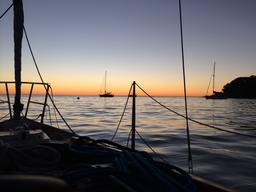