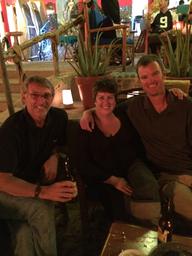 We've been in Cabo for one week. Every day has been sunny and at least 75 degrees - perfect beach weather.

For the first three days - Sunday, Monday, Tuesday - we stayed in the very nice IGY marina. The marina is surrounded by shops, restaurants, and bars all aimed at American tourists. The bill at the restaurant is even in US dollars. Everyone speaks English so it doesn't feel at all like we're in Mexico except that its December and I haven't worn shoes for days.

During our time in the marina we took a little break from cooking, did a little work on the boat, and drank a lot of Mexican beer. We found excellent chilaquiles, even better street tacos, and servicable pizza. Did I mention the cold Pacifico at every restaurant? The beers at the restaurants were usually 25 or 30 pesos which translates to about two bucks American. The beach bars charged 60 or 70 pesos for a beer but have a 2 for one happy hour all day every day.

On the boat we fixed several issues. The rolling furling gear on the jib jammed again on our way from Bahia Santa Maria to Cabo, so we needed to look at that again. I climbed the mast armed with Rescue Tape and a metal file. I filed the sharp edges off of the top of the rolling furling extrusion and then wrapped three turns of Rescue Tape around the newly dulled edge. I'm fairly certain that will keep the halyard from snagging. Fingers crossed! This time up the mast, I took some photos... 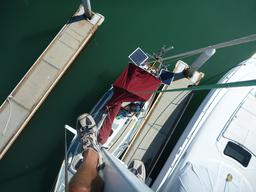 Being in Cabo is a lot like being in Vegas. Sleep isn't as easy because of the great nightlife calling our names. We've become accustomed to ten hours of sleep each night at sea, but the party life has us going to bed after 11pm. So after three days of non-stop fun, it was time to leave the marina. Another reason to leave is the expense. A slip for our tiny boat was $45 a night. That's substantially more expensive than any marina we've stayed at since we started cruising six months ago.

Our next stop after the marina was Bahia San Lucas - immediately off the main beach of Cabo San Lucas. Our cruising guide said it was a busy anchorage and they were right! During the day there was constant wakes from pangas, fishing boats, and jet skis. Fortunately there weren't many boats anchored over night.

Not many boats anchored overnight...that brings up an interesting story. When we went to bed on our first night at anchor, we were 100 or so yards away from the nearest boat. At dawn, we woke to a big CRUNCH. We had collided with another boat that had come in during the very early morning. Carolyn and I hopped out of our bunks and pushed ourselves away from the much larger boat. The folks on this other boat were not woken by the collision so I gave a loud "Hey! Hey! Hey!" That woke em up.

I asked the fella that came out on deck why he anchored so close and he said, "We were at least 30 feet away when we anchored and I don't think we've moved - we're on a pretty heavy anchor." Ugh. To sleep soundly we had Crazy Love riding on 125 feet of anchor rode. After thinking about it, we came to the conclusion that the crew of the larger boat failed to account for room to swing for the surrounding boats. The guy on the larger boat didn't understand what happened so we were forced to move. I suppose we'll have to get used to other sailors that have no clue about anchoring etiquette.

We pulled up our anchor and moved 500 yards East and re-anchored. What a crazy way to start the day.

To make the day better, we decided to put Peeps in the water and hit up Tabasco's, the beach club closest to the Crazy Love. We got ourselves some lounge chairs, an umbrella, and nachos. That made the day better. 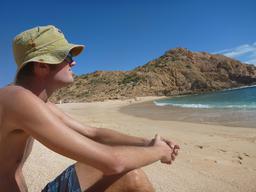 And find a better spot we did! We found our Corona commercial moment at a place called Santa Maria Cove about 5 miles Northeast of our spot in Bahia San Lucas. This anchorage is nearly perfect. The water is easily in the high 70's. The sun is warm. There are no jet skis and there are fewer vendors trying to sell crappy silver jewelry. During the day there are four to six party boats joining us to provide good people watching, but at sunset they disappear so we can have dinner and sleep in peace. 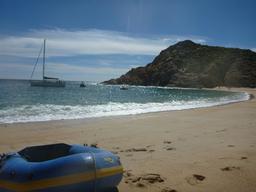 Carolyn and I quit our jobs, gave away all of our stuff and moved onto a tiny, tiny boat in search of moments just like this. We really feel like We Have Arrived! All the hard work on the boat and the pain of the shakeout cruise North was worth it. Any doubt we had about our ability to sail so far from home is no more. The warm water, great snorkeling, and perfect sandy beaches were worth all of it.

We've been anchored bow and stern in Santa Maria Cove for more than 24 hours and I think Carolyn and I will stay here until its time to give Crazy Love a rest for Christmas.

Not sure where to fit this in the previous narrative...During our time in the marina and at anchor, three times we went to a restaurant on the beach called The Office. The first two nights we went to the restaurant, we sat next to the same trio of nice folks from Los Angeles. On the second night, they leaned over and said, "You should have been here an hour ago. Baby turtles came out of the sand right under your table."

The story they told was that about 18 months ago a gigantic sea turtle came out of the water, right through the busy restaurant, and dug her nest under the table we'd been sitting at the previous night. The eggs in that nest decided to begin hatching right before we got there. Can you imagine? Show up at a restaurant for a few drinks and you get to watch baby turtles dig their way out of the nest. 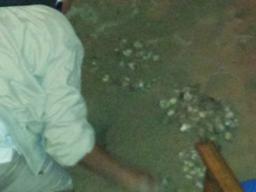 The restaurant called Mexico's version of Sea World to come remove the unhatched eggs and move the hatched turtles to the water so they wouldn't have to trek through the restaurant.

We weren't there for any of this excitement, but our new friends from L.A. were kind enough to forward their photos. Thanks Ken!

Next steps...we will stay here in Santa Maria Cove for a little longer, then head back to the marina in Cabo San Lucas. From there, we'll take the bus to San Jose del Cabo to stay in a rental condo for Christmas. After the first of the year we'll head towards La Paz and the Sea of Cortez which is supposed to be a cruiser's paradise.