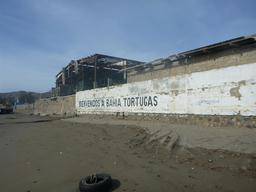 Bahia Tortugas is a town of 2000 - according to a local I asked - about half way between San Diego and Cabo San Lucas. For many cruisers it is a convenient fuel stop, but the Crazy Love used less than a gallon of diesel so no gas station was necessary for us. We were only in need of cold beer and tortillas. 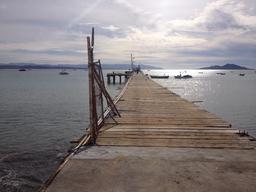 We spent two days in Bahia Tortugas. On the first day we rowed to shore and had lunch at a restaurant called El Moroco. The food wasn't the greatest and the service was even worse but the Wifi was outstanding. Seriously, it was as good as our Cox high speed internet in North Park. For a town without cell phone service, I was surprised. We were able to update the blog and get a weather forecast without fuss. 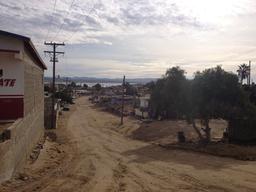 After lunch, we accompanied our friend Will to the Pemex so he could get some gas. The gas station was a half mile or so from the beach so we got to see a decent amount of the town. For a first shore day, it wasn't exciting, but we accomplished the things we wanted to. 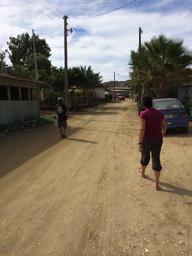 The following day we made a quick trip to shore to get rid of our trash. I bet you're really glad you're reading this, right? We were looking for the post office, but never found it. Another quick stop at the grocery store added a few more fresh items for our trip down to Bahia Santa Maria. One surprising thing about the stores is the lack of butter. They only had margerine. 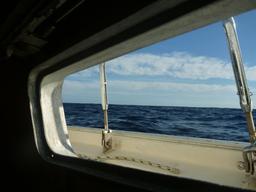 The sail down to Bahia Santa Maria was uneventful compared to the Ensenada to Bahia Tortugas leg. We had light winds, really light winds, and calm seas so we spent a lot of time reading and playing Settlers of Catan on the iPad.

After five days and 225 miles we pulled into the huge bay that is Bahia Santa Maria. There's just a little fishing village on the bay (maybe a dozen buildings), so we were fairly isolated. Fortunately there were lots of other cruisers to hang with. Our first night in the anchorage we went to Will's boat (Thalassi) for dinner and drinks - Rosie made veggie soup and cornbread, Will provided the rum. After dinner Bethany and Bryan from S/V Lilo joined us. They'd had a rough day. Their dinghy painter parted and the boat drifted away in the night. They had spent the entire day motoring around the bay looking for it with no luck. 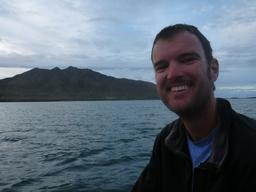 The next day we had hoped for a trip to the fishing village and a hike to the lighthouse and mangroves. We got peeps ready to go and rowed toward shore. Closer to shore the surf seemed, lets say, challenging and coming from different directions. We did not trust in our dinghy skills, chickened out, and rowed right on back to Crazy Love. The wind continued to pick up in the anchorage, bringing a little rain and making us think about departing for points south. Before we left the anchorage we were invited to S/V Lilo for lobster and bread (they have an oven!). It was the fresh bread that did it...Rosie said

I would row through a hurricane for fresh baked bread.

We were also very happy to meet Hannah and Meira, part of the Lilo crew.

Will also joined us and to add excitement to the evening we almost lost his dinghy. We couldn't believe another dinghy was on the loose. Did we mention the winds were picking up. No worries, we caught up to it and all of us have sworn to triple tie up any and all dinghy painters.

It was a lovely evening sharing food, drinks, and stories with new friends. While we were rowing home I said to Rosie,

We're doing something right when rowing home at 11pm in the pitch black with the wind blowing like crazy and water coming over the front of the dinghy and it feels normal.

We were hoping the next day would be a calm day in the bay and we could try that beach landing. It was not meant to be and with the winds picking up we felt it time to move further south. On to Cabo and in up to 20 knot winds and rolling waves 5-8 feet in height, we made it in record time down the coast, arriving Sunday afternoon to Cabo San Lucas. 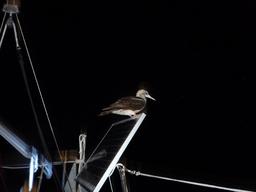 It is sunny, the beers are cold, the tacos are delicious and all can be enjoyed with my toes in the sand. We have arrived! 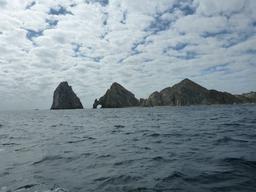 Oh, I forgot to mention...the water is 80 degrees!