The boat work has been moving quickly this week. On Monday, we had breakfast with our new friend Ronnie Simpson. Ronnie has hordes of sailing experience, most of it single handed, and he's not afraid to share his experiences and extensive knowledge. Breakfast was a great learning experience for Carolyn and I. After we ate, the three of us headed back to the marina where Ronnie gave us some free advice on how to improve our reefing system.

Based on his recommendations, Carolyn and I removed the boom and walked it over to Rigworks. The boom is 11 feet long and weighs less than 30 pounds. We walked down the sidewalk with the boom tucked under our arms; me in front, Carolyn in back. We got some curious looks and even a "Nice boom" from a passing motorist. We're hoping to have three things addressed on the boom:

On Tuesday, we also took the sails to Ullman Sails for repairs. We're having a few things done to the sails. 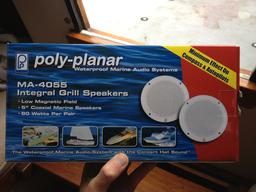 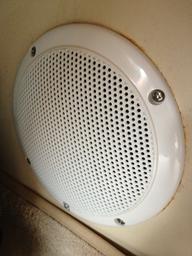 We bought speakers of the same make and model as our old ones so they would be a drop in replacement. It took less than 20 minutes to install them and they sound great. Ever since we bought the boat we've only had one working speaker. I replaced the stereo during our May boatwork sprint, but skipped the speakers because I figured we could do without. I was very wrong. The new stereo sounds much, much better with two working speakers. We've been listening to the World Series the last few nights and it sounds great! 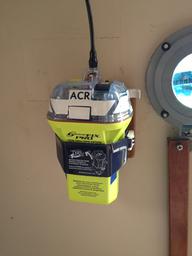 The EPIRB is a simple gadget in principle. Pull the lever on top and help is on its way. In practice, it is much more complicated. The unit has a built in GPS, so when we activate the unit in a life-threatening situation, it sends our location and a unique code to a sattelite that alerts someone who might be able to help us. In the U.S. that "someone" is the Coast Guard. I'm not sure who it is in other parts of the world.

Also on Wednesday, our solar panels from Rob at Southbound Solar arrived in the mail. We're hoping to install those next week so we have a power source besides our engine's alternator.

I think we're still on track to leave on November 9th, but that could change depending on how quickly we get the boat put back together and provisioned.