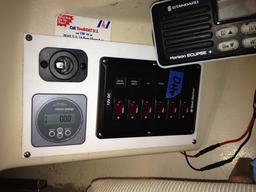 S/V Crazy Love has two electrical panels: one on port, one on starboard. The starboard side panel was replaced by a previous owner and works well for us. It controls all the lights on the boat. 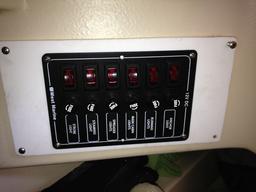 The port side panel controls all the instruments and radios on the boat including the depth sounder, stereo, VHF, and the all important tiller pilot. On the port side we also have a 12V cigarette lighter adapter to charge our phones and other gadgets. The panel on that side was original to the boat until I removed it last week. The old panel only had three circuit breakers, so several devices shared a single breaker (the stereo and VHF in particular). The old panel has been replaced with a brand new West Marine 6 circuit model.

In the photo at the top, the battery monitor is the square grey bit in the lower left of the photo. The idea behind the monitor is to tell us how much charge remains in the batteries. This is important to us for many of the same reasons that a cell phone user cares about how much charge is left in her batteries. For the boat batteries, it is even more important. The lead-acid batteries on a boat can't be drawn down to 0% charge like a phone battery without permanent damage. In the past, Carolyn and I have guessed about the state of charge. Since we're planning to get new batteries in the next few weeks, we want to know for sure how much charge is left so we don't destroy the batteries before our cruise is over.

While I was installing the battery monitor, I did a bunch of little things that hopefully will make the electrical system a little better.

Next on the upgrade list is solar panels and new batteries.