We arrived in Prisoner's on Saturday afternoon and spent the next 36 hours hoping our anchor would hold. The winds in the Santa Barbara Channel, just outside the anchorage, were forecast to gust to 30 kts. It was blowing at least 20 knots in our supposedly protected spot. Bruce, our bow anchor, held the boat in place so we rested well on Saturday and Sunday night. 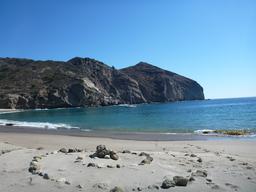 When we arrived at Coches Prietos, it was empty and beautiful (see photos). Who says there's no such thing as a private beach in California? It was only private for about 6 hours however. By the afternoon three other boats were anchored near us. 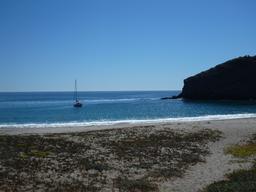 We spent four days at Coches sitting on the beach enjoying the sun, sand, and water. The water was actually warm enough to go for a 20 minute swim! 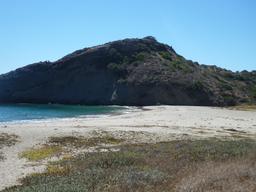 Since Coches is small, we anchored with fore and aft anchors. When everyone does this, more boats can fit in a smaller space since the boats don't swing in a big arc like they would with only a bow anchor. We had our stern anchor set towards the beach, bow anchor away from the beach (if you have a good imagination, you can see this in the photos). During the evenings, the wind howled out of the canyons, off the beach and into the anchorage. We found out later that it was consistently in the 20-25 kt range. We had never tested our stern anchor in conditions like this, but Dani (that's her name) held Crazy Love in place without complaint.

There were five other boats in the anchorage with us. We met pretty much everyone on the beach while we all watched one poor fellow try to get his stern anchor to stick - I think he got it to hold by dusk. On Thursday evening, we were invited over for dinner on a boat called Carnivale. It is a 40 foot boat with a crew of three very nice fellas. They made some excellent food. They had speared three sheepheads while diving earlier in the day, so fresh fish was on the menu. It was delicious!

We planned to pull up our anchors on Friday and head to Cat Harbor on Catalina Island as a final stop on the way home. Things didn't quite work out that way.