200 miles, 60 hours, 2 small craft advisories. We left Monterey on Thursday morning like Carolyn said in her last post. The forecast looked favorable from Monterey, around Point Conception, and on to Santa Cruz so we decided from the start that unless there was a need to stop we were going all the way. 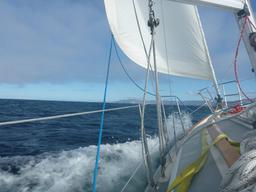 We left Monterey at 8:30am after settling our bill of $210 for 11 nights at the marina. There was no charge for the tow into the marina! The wind was light from the West so we motored to Point Pinos with a reef in the main. Once we were to Pinos we turned South and shut off the motor. We rolled out half the jib - the winds were forecast for 10 to 20 knots - so we weren't heeled over too much once it started blowing.

When the wind started blowing a little, maybe 12 or 15 knots, we started to move along nicely. Steering by hand was fun for a few hours, but after we each took a turn driving it was time for the tiller pilot. We tried both of our tiller pilots, but neither would steer the course we set it to. Bummer! That meant we'd have to hand steer for the rest of the trip. I had no desire to steer by hand in the middle of the night when I'd rather be sleeping. This is my vacation.

After thinking about the tiller pilot issue for a little while I remembered disassembling the power connector a few months ago. At the time, there was a decent amount of corrosion on the terminals inside the boat. During Carolyn's turn at the tiller, I got out the tool kit and started troubleshooting. You have no idea how much Carolyn is turned on when I break out the multimeter! I measured 12 volts from the outside of the jack, so no problem there. Next I removed the mounting screws for the jack and discovered what ultimately was the issue. The corrosion I saw previously was everywhere; it had nearly eaten through the power cables. Here's where having a decent tool kit comes in handy: I cut off the corroded part of the cable and stripped off part of the jacket. Oh yeah, I also remembered that a previous owner of Crazy Love had left us a spare jack. What a nice guy! I put the freshly cut wires into the new jack and reassembled the whole thing.

We plugged in the tiller pilot and it worked! Woohoo. Did I mention that Carolyn was driving the boat this whole time and we were bouncing in the waves? The wind and waves had also picked up to 15+ knots so we were going a solid 5.5 kts. It was lovely.

We were deep reaching, maybe running with those winds for most of the first day. During the evening, the winds died down a little so it was easy to sleep. During our previous over-nights, two hour watches worked so we stayed with that.

On the first night we didn't feel like jibing (turning) Southeast so we ended up way farther off the coast than we anticipated. At about 4am I looked at the GPS and realized we were almost 40 miles from land. At dawn on Day Two, we were nearing Port San Luis - nearing the latitude of Port San Luis; we were still 40 miles away. We jibed the boat onto a ESE course that would take us most of the way to Point Conception.

On Day One we made 90 miles toward our destination of Santa Cruz Island; most of that was South'ing. Now we had to do the East'ing. On Day Two we pointed the boat toward Points Arguello and Conception and we didn't make it there until the middle of the night. Sometime during the late evening, we passed Point Arguello and during my 2am to 4am watch we passed Point Conception. The light at Point Arguello was not visible, but the one at Conception was good and bright. Conventional wisdom says to round theses two points in the middle of the night (2am is best). The wisdom of the croud was right. The winds were 10-15 kts from the West and we were moving right along. As long as we didn't hit any of the oil platforms in the Santa Barbara Channel, we'd be fine. Thinking about it now, it was some of the best sailing I've ever had the pleasure of experiencing - not too cold, not too much wind, no traffic, Just Right.

During the evening we had entered the Traffic Separation Zone in the Santa Barbara Channel, so now we had to watch out for big ships. Fortunately there were none until after dawn. 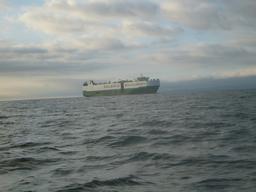 In the late morning on Day Three, with about 30 miles to go, the wind died on us. We floated along at 2+ knots. The forecast for the afternoon was 15-25 kts so we just had to wait. Once the wind came up it really came up! It went from mostly dead to 25kts in a matter of 30 minutes - just as the NOAA forecast predicted. This was our second small craft advisory of the trip down from Monterey. The other one was for the big waves just South of Monterey.

The bigger winds pushed our speed to 6+ kts and the waves sent us surfing. With that much speed, we made it into Prisoner's Harbor on Santa Cruz Island at about 6pm and set the hook with a whole bunch of scope. We made it! It was a proud moment for Carolyn and I. Our previous longest sail was 70 miles. This leg of our journey was triple that. The mileages going down to Mexico will be much longer than we've seen in California so getting a multiple-hundred mile trip under our belt was a good confidence booster.

A few things we learned during this leg:

As a result of these revelations:

The Plan from Here

We'll spend two days in Prisoner's Harbor relaxing and waiting for the big winds to die down. Then we will head to the other side of the island to an anchorage called Coches Prietos. Some very beautiful Santa Barbara residents from the anchorage next door recommended that spot and we all know that beautiful people are smart and talented, so we took their suggestion as word from the Flying Spaghetti Monster himself.