On Saturday, the weather was looking good for us to make the big (for us) jump from Santa Cruz to Avila but Crazy Love had different plans. The engine wouldn't start when we were ready to leave. It was pretty obvious we had drawn down the batteries too far. Oops! The extra time and strain we put on the tiller pilot during our trip down from Half Moon Bay was the likely culprit. We considered several options to get us out of the jam:

We tried option #4 first. Crazy Love's previous owners equipped her with a bunch of gadgets that we've kept but not used until now. I pulled the solar panel from the storage locker under Carolyn's berth and plugged it in. We waited 20 minutes and tried to start the engine. The starter kicked this time, but didn't quite have enough oomph to get the engine going. Encouraging results, so we waited another 30 minutes and tried again. This time the engine started. Woohoo! We had managed to get out of a jam on our own with patience and a lot of luck. We're going to need more of both before this Crazy Journey is done.

We finally have the engine running and are only 1 hour behind schedule. We assumed that since the engine was running the batteries were charging - that had always been a safe assumption. To charge up the batteries, we were going to motor the 20 miles down to Point Pinos so we would have plenty of power for the tiller pilot during the evening. We have a little analog voltage gauge on our electrical panel that, when the batteries are charging, reads 13 or 14 volts, but it was only reading 11 volts. Not good news. Carolyn suggested we turn off the engine, wait a little while, and then attempt to restart it. The idea was to see if we had replenished the batteries; if not, then we would pull into Monterey to figure out what was wrong. The engine didn't start. It was pretty clear the batteries weren't getting charged.

We turned East toward Monterey to make repairs. When we were 10 miles away, Carolyn called the Harbormaster to get a slip. They had a slip available and they offered to tow us into the slip. The folks in the Monterey harbormaster's office definitely are the friendliest and most generous marina people we've met during our travels on the California coast.

The sailing into Monterey was some of the best we've ever had - mild winds, blue skies, warm sun. I hope the rest of the trip South is half as nice. The harbormaster came out to tow us into the marina. We made it safely into a slip by 7pm and resolved to attack the problem first thing in the morning. 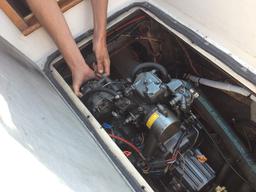 Our first suspect was the alternator. If the engine is running, the batteries should be charging, right? We started the engine and put a voltmeter on the alternator terminals. It read battery voltage - 12 volts. Ugh, not what we wanted to see. I removed the alternator and we walked a mile and a half to the Napa Auto Parts where they ran a test on it. The alternator failed the "Stator Voltage" test. Okay then, now what? We were off to the Alternator Starter Exchange. The test there said the alternator was fine - putting out a steady 14 volts.

That's not ambiguous at all!

I trusted the Exchange test more than I trusted the Napa test, so we re-installed the alternator and did our own test. 14 volts. How is that possible? I have two theories. While the alternator was at the Exchange, Carolyn and I cleaned up the batteries and made sure the water in each cell was topped off. Perhaps the batteries were so dirty they weren't charging? I have a hard time believing that. 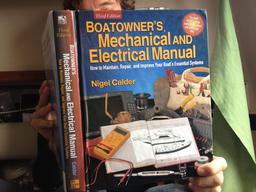 Another possibility I read about in Boatowner's Mechanical and Electrical Manual:

With a really dead battery, many alternators just will not start producing output,...

Perhaps this is the issue?

The paragraph goes on the describe how to give the alternator just the kick it needs, but that assumes you can get the engine started at all. It is possible to start our engine manually, but we do not have the right tool to do it. Might be a good investment before we go to Mexico.

The wiring doesn't seem to be the culprit because the voltage drop between alternator and batteries is less than 0.5 volts when the alternator is putting out 14 volts. The references I have say anything less than half a volt is acceptable.

Since the alternator and wiring seem good, we suspect the batteries might be the issue. To give it a real world test, we've unplugged the shore power and are using as much power as we possibly can. We've got the laptop plugged in, the stereo is on, and all the lights are on. We'll do that for 24 hours or so and then see if we can fire up the engine. Fingers crossed that the alternator puts out some juice when we start it up.

We had planned to be leaving Avila by now, heading to Santa Cruz Island shortly. Yoda says, "A few days behind, you are." The winds between Monterey and Avila are looking heavier than we're comfortable with so we'll likely hang here through the weekend. There's a positive and a negative aspect to that plan. The good: we get to spend Carolyn's birthday in Monterey; the bad: our time on Santa Cruz Island shrinks by almost a week. That's a bummer, but we have the hope of much Island Time in the Sea of Cortez this winter to cheer us up.

To sum up our updated plan: I'm gonna sit right here and have another beer in Monterey, CA.