Getting to San Francisco

When we left the Petaluma Marina, we motored down the Petaluma River to anchor at McNears Beach for a night. The anchorage at McNears Beach was calm, warm, and uncrowded. We relaxed for the evening and headed to Quarry Beach on Angel Island the following morning. Quarry Beach had a significant breeze, a crazy tidal current, and lots of waves from the ferry traffic. It was an uncomfortable night at anchor - one of those nights where we had to hang on to avoid falling out of our beds in the middle of the night. Even though we were tired in the morning, we were happy to be heading to the big city for a few nights.

We had a reservation for 5 nights (Tuesday to Sunday) at South Beach Marina right next to AT&T Park. When we got the reservation, we had no idea how great this spot was going to be. Besides being next to the ballpark, it was close to public transportation, breweries, and the embarcadero. So many great things to do, what did we do first? Brew pubs of course! 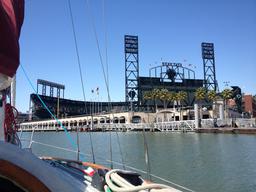 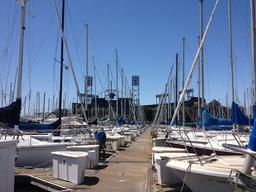 Less than a mile walk from the marina is 21st Amendment. After a few pints there, we went around the corner to the Thirsty Bear for dinner. Sitting in the bar, I had an excellent burger and the tasters. Given the chance, I'd go back.

The Red Sox were in town for a Monday, Tuesday, Wednesday series, so on our way back to the marina, we stopped in right field to watch a few innings of free baseball. 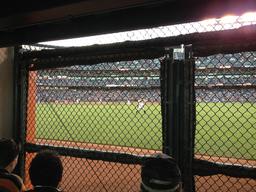 We had originally planned to anchor in McCovey Cove for the day game on Wednesday, the 21st, but decided to go to the game instead. Nosebleed tickets on Stubhub were only $14, so we bought three. Amy drove in from Fresno to join us for the game. Before the game we met up with our friend Christine (currently of San Francisco, formerly of San Diego) at Public House. Good times would be had with Christine. 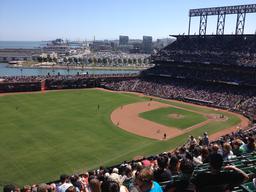 After the game we headed to Potrero Hill for the Connecticut Yankee. After the pricey beer at the breweries and the ballpark, it was nice to be at a locals bar where refreshment can be had for 5 bucks.

It turned out to be a good night out with a little hiccup at the end. Carolyn, Amy, and I didn't follow Christine's directions to get back to the marina on the bus, so we ended up walking about 3 miles home. Oops! Its all part of the Crazy Love adventure.

For Thursday, we planned to spend the afternoon and evening in Golden Gate Park. We took the train to get there mid-afternoon and walked West to see the beach and windmills. We saw the windmills from a mile offshore before we passed under the gate, so we wanted to see them in person. They're impressive up close. 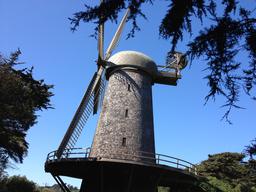 In the middle of the park is the California Academy of Sciences. Rosie and I enjoy museums, but the tickets for this one are $35. Fortunately, they have a Nightlife event every Thursday evening where the tickets run $12 and, and, wait for it...they set up a bar on every floor with a specialty cocktail. If there was an event with booze you knew Rosie and I would find it. 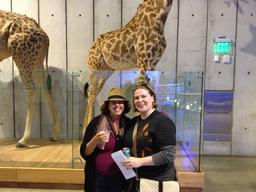 On Friday morning we saw The World's End and were so inspired that we headed off to Toronado for a pint. Toronado San Francisco was one of my "wish list" items for this trip and it didn't disappoint. They even had Death & Taxes.

After a few at Toronado, we moved on to, not greener, but other pastures that need not be discussed here.

Three Musuems & a Failed Attempt at a Cable Car Ride 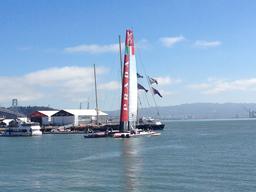 On Saturday, Carolyn and I started the morning with a walk on the Embarcadero to the Ferry Plaza Farmer's Market which definitely takes the cake for best farmer's market we've seen in California. They had everything: pizza, sandwiches, mexican, italian, and more on the hot food side, and everything you can expect on the farmer's side. We had a pizza for lunch and came home with Chanterelle and Shitake mushrooms and marinated pepper relish. On a later trip we picked up sourdough and parmesan. 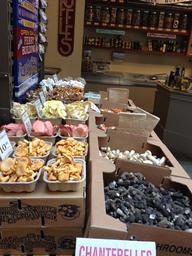 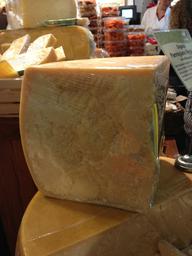 After the market, we walked through the financial district towards China Town hoping to catch a ride on a cable car. While trying to find the cable car stop we ran into the Cable Car museum. I never thought about the meaning of cable car, so I was surprised to learn that cable cars are propelled by a cable moving underneath the street. 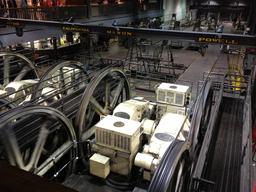 Then we tried to get on a cable car. We waited at the stop nearest the museum and saw three cable cars, but they were full and the drivers told us to "catch the next one." Bummer! No cable car ride for us, so we walked toward Fisherman's Wharf.

At Aquatic Park is the San Francisco Maritime Museum. We took the free tour which amounts to walking down the pier and looking at the ships from afar. We didn't pay to go on the ships because we had other sights in mind.

Onward we marched to Fisherman's Wharf. It was crazy busy! We got out of the crowd by going in Boudin. They have a museum and bakery viewing area on the second floor that's worth a visit. The museum covers more than just the bakery. The company is so old, there was a bunch of history about the 1906 earthquake that Carolyn and I had been looking for.

At that point Christine caught up with us. We headed to the bar where the Irish Coffee was first served in the U.S. - The Buena Vista. In addition to out-of-this-world Irish Coffee, they have excellent Guinness and clam chowder. Then we were off to China Town for dinner.

Sunday morning arrived and we weren't the least bit prepared to vacate our slip in the city. I extended our stay by one night - for the grand sum of $35. Sunday was dedicated to provisioning for two nights at anchor - one at Angel Island and another at Treasure Island, but we'll leave that for the next post.