Up the Petaluma River 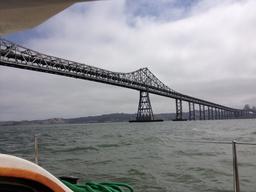 On Monday the 13th, Carolyn and I took Crazy Love up our first river - its entirely possible Crazy Love has been up a river but we don't know what happened during her first 28 years. We motorsailed the 25 or so miles from Richardson Bay to the Petaluma Marina. Getting to the entrance of the river took us under the Richmond-San Rafael Bridge. We headed up the river on a rising tide because at low water, the river is no deeper than 4 feet in many places. Running aground in the river didn't sound fun but with a rising tide, if we did hit the bottom we would only have to wait a few hours for the tide to lift us off. Fortunately we didn't run aground.

At the entrance to the river there's a train bridge that is open most of time. As we approached, the bridge was closed to allow a train to pass, so we got to watch the bridge open up. As Monday mornings go it wasn't a waste of 5 minutes. 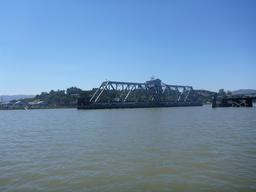 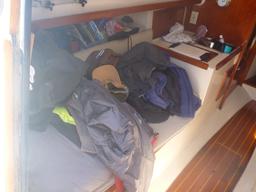 The river twisted and turned for more than 10 miles until we arrived at the Petaluma Marina. The harbormaster is closed on Mondays so we waited until Tuesday morning to get ourselves a slip. Since we didn't have an assigned slip for Monday night, we tied up at the launch ramp dock. In most places, especially San Diego, this draws the attention of the police, but no one said a word. It was a successful application of better-to-ask-for-forgiveness-than-permission reasoning. 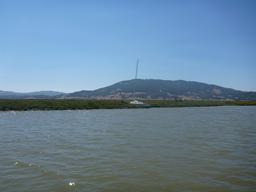 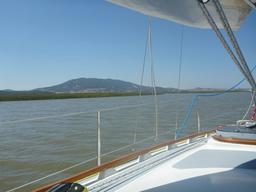 We got a slip for 5 nights at $24 a night with the plan to leave on late Sunday morning.

We're heading to the El Dorado Hotel on the Sonoma Square for a few nights in a real bed.