Today was the day, the day Dave and I entered into the realm of North California Sailing. Entry by way of the Golden Gate Bridge to San Francisco Bay.

This bay is known by the best sailors for its crazy currents, strong winds, and constantly changing weather. Lets just say its a little intimidating to two (still green - all things considered) sailors that took their first class only 8 years ago in the tamest bay on the west coast.

After careful planning, a couple glugs of maalox (not really but I might have if it was on the boat), we headed out from Half Moon Bay to the golden entry gate of San Francisco Bay.

Its all in the timing of approach. Twice a day all the waters from the bay ebb out then flow back in with the tides through the narrow entry under the Golden Gate Bridge. You can time it to ride the tide in, or time it to fight your way in as the tide ebbs out (which may or more likely may not be possible in Crazy Love as it flows up to 4 knots at times).

Today around noon would be max flood at 3 knots with high tide at 2 pm and we had till 4 pm before the water would start flowing back out and against us. The forecast was for mild winds (even though they said from the West in the am, it was the typical NW winds) and only 2-3 ft wind waves. We headed out of Half Moon Bay at 8 am, motor sailing with the waves pushing us favorably North. We made great time and by noon we had the bridge in sight! 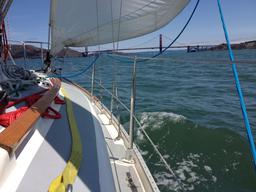 There are 3 major traffic separation schemes for the large cargo and other ships to use in their approach to the bay entrance as well as in their departure. It was our goal to stay out of these "traffic lanes". San Francisco even has a dedicated channel for traffic control on the VHF. It was our lucky day - no ships coming or going as we made our approach and passage from the south, hugging the coastline about 2 miles out. 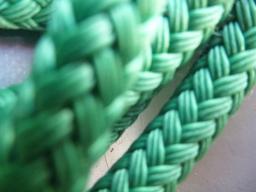 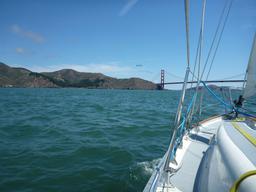 With the buoys and bridge passage in site, we pulled out the jib and cut the engine so we could sail into the bay. And sail we did! With the tide going in and the wind at broad reach, we were going up to 7-7.5 knots (top speed for Crazy Love).

Not only did the traffic comply, but the fog also gave us a much overdue break and the sun shone. Absolutely gorgeous views! 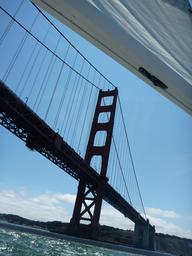 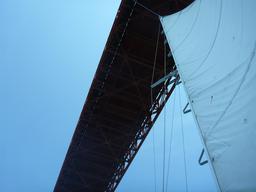 Once under the bridge with a view of Angel Island and Alcatrez in the background, and the Emirates Team New Zealand practicing for the America's Cup, we headed north into Richardson Bay and dropped anchor. We made it to San Francisco Bay! 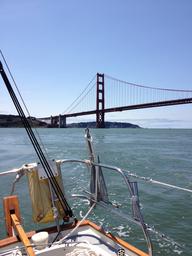 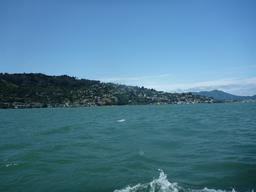 Sausalito is the town here on the north end of the bridge. Pretty homes go up the hill with a view of the bay and city. We plan to stay a few nights, explore a little, and plan our exploits for the rest of the month in the San Francisco Bay.