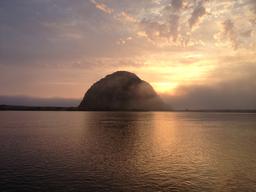 Today is a stopover day in Morro Bay. Carolyn and I arrived yesterday at about 8pm in pea soup fog. We left Port San Luis at 10am under full sail because the forecast said the winds were supposed to be 10 knots or less from the West. When we got to the end of the Port San Luis breakwater, the wind was blowing at least 15 knots. That caused the boat to tip over more than we wanted, so we turned around briefly to reef the main sail. Passing the end of the breakwater again, we decided we had the right amount of sail.

Aside: I document the sailing days so Carolyn and I will remember the interesting bits when we look back on the trip in 10 or 20 years. I apologize if my writing is boring, incomprehensible, crude, or technically inaccurate.

We unrolled half the jib and headed Southwest to put some distance between us and the shore. Once we had a few miles under our belt, we headed Northwest. We took several Southwest, then Northwest tacks until we rounded Point Buchon at about 5pm. That's when the fog started to get thicker.

For the next three hours the fog kept getting worse and worse. Morro Bay has a reputation as one of the foggiest areas on the Pacific coast so we expected fog, but not this thick. We used the GPS to find the "MB" safe water bouy, then we used the charts and listened for the fog horn to find the entrance of the harbor. We didn't see the "MB" bouy until we were 25 feet from it even though we heard the whistle on the bouy long before we saw it. Once we entered the channel, the fog cleared up significantly to allow us to anchor.

Carolyn took the picture at the top after we anchored.

Morro Bay has a significant tidal range, which we have not seen before. At high tide, we were in about 20 feet of water. At low tide, about 5am, the depth sounder said we were in 8 feet of water and the birds were walking on the shore less than 20 yards from the boat. That caused some sleeplessness until the tide started to rise again.

Today, Carolyn and I had two shore excursions. The first was to hit the grocery store to provision for our trip to Monterey. The second was to get some fish and chips. It was a warm, sunny day unlike our entrance yesterday.

Tomorrow we head out early for San Simeon which is 27 or so miles Northwest of Morro Bay. We will spend about 12-18 hours there and then make the 85 mile trek into Monterey if weather permits. We're hoping to pass the Big Sur coast during daylight.