We made it! Carolyn and I arrived in Port San Luis Thursday evening right before sunset and anchored between the Cal Poly and Avila piers.

Earlier that morning in Cojo Anchorage...we woke at 2am to get underway, but the wind was whistling and the waves were significant even in the anchorage. It was also pitch black - like can't-see-my-hand-in-front-of-my-face kind of dark. If the weather and darkness in the anchorage was like this, then the conditions around Points Conception and Arguello would not be to our liking. We went back to sleep with the intention of waking up an hour later. I missed my alarm, but Carolyn woke at 3:45am and saw the same wind and waves as before. We both got up at 4:45am to flat calm water and no wind in the anchorage. The pre-dawn light was also starting to show itself on the horizon. It was time to get underway.

Before we went to bed the night before, we had prepared the boat and our gear so we would have minimal preparation to get underway when the conditions looked right. We even skipped breakfast. At about 5:15am we motored out of Cojo Anchorage. 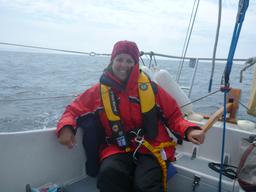 Both Carolyn and I had a lot of clothes on. I was wearing a long sleeve t-shirt, vest, sweatshirt, foul weather jacket on top and long underwear, pants, foul weather pants, and rubber boots on the bottom - I picked up the boots in Santa Barbara and I'm very glad I did. I also had a scarf (Thank you Carol!) and beanie for my head. Carolyn had a similar ensemble. It protected us well from the wind and water, but it made going to the bathroom quite a chore. Imagine this...you're wearing all the clothing you own and you have to go pee but your toilet is mounted on a tiny platform that moves six to twenty four inches in any direction at any time. Quite a challenge when you have your knickers around your ankles. And yes, on the boat I sit to pee.

Once out of the anchorage, the waves increased quite a bit. The boat would rise over one wave, pick up speed heading down the back of the wave and then crash into the next wave sending a huge spray of water into the cockpit. It was a wet few hours. The problem with crashing into the next wave is that the bow (front) digs into the wave, stopping the boat. So now the boat's stopped, with 30 (maybe?) gallons of water sloshing around on the side decks and the boat is off course. We considered turning around to try again another day, but decided that turning around meant going all the way back to Santa Barbara and that these conditions were "normal" for the Cape Horn of California. After 5 or so hours of this, Crazy Love and her crazy wet crew were safely around Point Conception and Point Arguello. Then the waves calmed down. 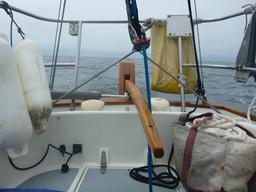 With the tiller pilot steering, the final 30 miles passed quickly. Carolyn and I took turns keeping watch one hour at a time, but we were usually both on deck. North of Point Arguello is, I believe, Vandenburg Airforce base. It was some very beautiful coastline that I would bet not many people get to see like we did.

We also saw some humpback, we think, whales. One group of two whales was about 15 miles South of Port San Luis and another group of 5 (or so) was just outside the entrance.

Carolyn and I plan to stay in Port San Luis for 9 nights. Morro Bay will be our next stop where we will head, weather permitting, next weekend.