Writing from Cojo Anchorage with not much of a wireless connection...

After eight wonderful nights in Santa Barbara it was time for Carolyn and I to move on up the coast. Our next port of call, Port San Luis, is more than 90 miles from Santa Barbara. We're not quite ready for that long of a trip, so we've stopped at Cojo Anchorage - about half way to Port San Luis.

We planned to leave at 7am but ended up pulling away from the dock in Santa Barbara at 7:15am. It really is a miracle that we were only 15 minutes late. Every time we've tried to plan something since we've been living on the boat, we're always an hour or more late. Being only 15 minutes late this time was pretty good for us.

The winds were light, almost non-existant, and the water was glassy so we motored west, directly towards Cojo for about 90 minutes until we got a more significant East breeze. We set the sails, turned off the engine, and were able to sail for 30 minutes until that little breeze died. I know its lame that every time the wind dies we turn on the motor, but we would rather not arrive at a new-to-us anchorage in the middle of the night. So on we motored. Three separate times we attempted to sail, only to have the wind die.

At 2:30pm the wind picked up nicely. So nicely that we were overpowered and had to roll up the jib 1/3 of the way and put a reef in the main. [Translation for non-sailors: We reduced the amount of sail so we weren't so tipped over]. After we reefed, we moved along very nicely at 3+ knots. We rode that great breeze until it quit at 6pm, but by then we were within ten miles of the anchorage. We had 90 minutes until sunset, so we motored the rest of the way and set the anchor just after sundown with a lovely purplish-orangish glow on the horizon. It had taken us 14 hours to cover 40 miles. We were tired, but glad to have arrived safely. 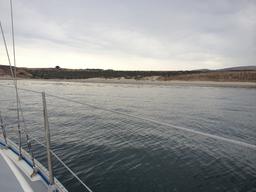 There isn't a town here and there are no homes on the hill above the beach so it is very dark which means the stars are stunning, but there are train tracks on the cliff above the beach. We are not more than 1/3 of a mile from the beach so the train lights peaking through the fog at 11pm were quite the sight. Carolyn made a lovely dinner of chili-Mac (that's Mac & Cheese with a can of chili in it) and hot cocoa. We watched the stars until we were convinced the anchor would hold. Then we were off to bed.

The weather is looking good, so we are going to leave tonight for Port San Luis. Conventional wisdom, and our cruising guide, advise us to round Points Conception and Arguello after midnight when the wind and waves are mild. Our plan is to pull up the anchor at 2am (cause all the good stuff happens after closing time!) tomorrow morning and get underway. The trip to Point San Luis is about 50 miles. We hope to make it by sunset, but aren't afraid to come back to Cojo if the weather is too much to handle.