4th of July in Santa Barbara

On our first full day in Santa Barbara we went to the West Marine in search of parts for new lifelines. They didn't have what we needed, so they put in an order to arrive the following morning. Once we got all the parts, it took me a few hours work, but it was well worth it. They look great and should be much safer than the old, rusting ones we had on the port side. As another plus I can now say I know how to do the locking Brummel splice!

Tuesday evening, still in our first full day, we went downtown for the excellent Santa Barbara farmer's market. It was all farmers and none of the fluff that we see at other markets. 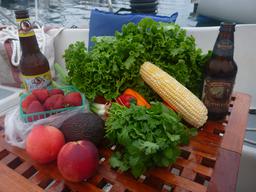 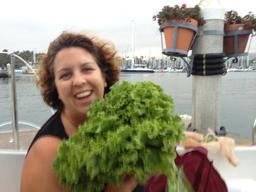 Wednesday night was date night. We had a lovely grown up dinner out stopping at a few of the great spots along State Street.

In our last post, we invited anyone to join us for 4th of July in the harbor. Amy took us up on the offer. Carolyn reorganized the boat to make space for herself in the v-berth so that Amy could use her berth. It was cozy - or cramped, depending on how you look at it - but it worked. 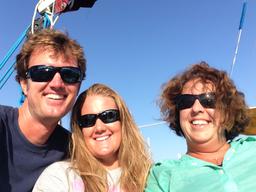 We had a very American menu of carne asada burritos to cook on our two burner stove. They turned out pretty good. Thank you Santa Cruz Market for the great eats! 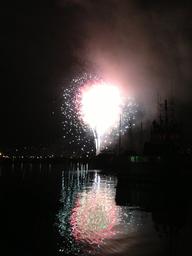 We watched the fireworks from the dock with the company of several thousand other boaters in the marina. As the Harbor Patrol promised, we had a fantastic view of the city fireworks. In the photos, you might be able to see the reflection of the fireworks on the water. I couldn't decide if it was better to watch the show in the air or off the water. 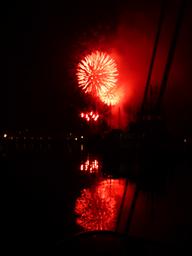 The morning after the fireworks we showed Amy the town. She treated us to full American breakfast at Beachbreak Cafe (including a BBQ burger). Fully satisfied, we did a little shopping on State Street (we now have spare sunglasses) then we toured Stearns Wharf. It was rumored this was where the dinghy dock was if we were to anchor instead of staying in the marina... can you imagine climbing from the dinghy up to the pier? It isn't something I would do carrying 30 pounds of groceries. 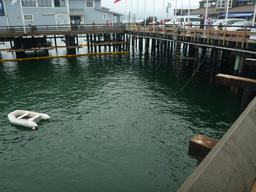 Thanks for the great visit Amy!