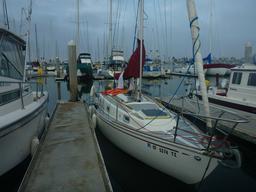 For a quick stop on the way to Santa Barbara, Rosie and I had the pleasure of choosing between Channel Islands Harbor and Ventura Harbor. The harbors are separated by only seven miles and we were approaching Channel Islands by noon, so we decided to go to the farther marina and get just a little closer to Santa Barbara. There was very little wind yesterday, so we motor-sailed from 8am until we arrived at Ventura Islse Marina at 4pm. We checked in with the marina office, paid our $37.50 ($1.50 per foot per day), and headed off to the showers.

After some much needed primping - I always need primping, Carolyn not so much - we went in search of a cold beverage and dinner. On the way to dinner, we came upon a "touristy shop" that sells t-shirts, hats, and the all-important sunglasses. Since we had sailed all day without sunglasses we very much appreciated having a new pair. If only they sold oars...

A hundred or so yards away Rosie and I found a bar table at a Mexican restaurant. Three margaritas, a burrito, and a $50 dinner check later, we were off to bed at the impossibly late hour of 9pm.

For today's trip to Santa Barbara, we have an odd looking forecast. An odd looking, but very positive forecast. If the winds actually blow from the East, they will be almost directly behind us. That'll make for some nice sailing.

We called the Santa Barbara Harbormaster in advance of our arrival and they don't have slips available right now, so we will anchor until something opens up. Check-out time in Santa Barbara is noon and I'm writing this at 9am so we're hopeful that by the time we arrive, there will be something for us.