After three expensive nights in Cat Harbor (the moorings are $38/night and the beers are $8) we had one more stop to make on the South side of the island - Little Harbor. 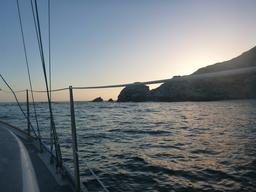 This little cove is big enough to hold two or three boats at anchor, but we had it to ourselves for the night. There is a nice beach and a busy, primitive campground in Little Harbor, but no stores or services. This made for a quiet and free stay for the night.

Since Little Harbor is on the south side of Catalina, it is exposed to the west swell. The boat was rolling all over the place as we slept. Fortunately our anchor was well set and it held through the night. Carolyn and I planned to stay in Little Harbor for just one night, so after breakfast in the morning, when the wind seemed like it was going to pick up, we pulled up the anchor and sailed North West in a South breeze to get around the West End of the Island. It turned out to be a great sail - Carolyn did all the driving.

Our destination was Doctor's Cove. We had stayed there for one night on our way to Cat Harbor, and we thought it would be a good place to start our trip back to the mainland. 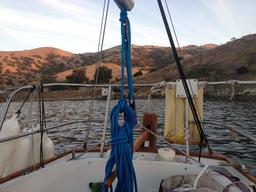 Carolyn made a fantastic 13-bean-chicken-and-rice-curry for dinner and we shared our last bottle of wine before turning in for the night. In the morning, the swells started making the anchorage a little uncomfortable because we were anchored fore and aft (translation: we set one anchor in front of us and one behind us) and we did not have the boat pointed into the waves. When the waves hit the side of the boat, it causes the boat to rock from side to side. We took this as a sign it was time to leave. At about 9:00am we were underway towards Redondo Beach (King Harbor).

We pulled into our guest slip at the Port Royal Marina at 3:30pm. The trip was 23 miles. The first 10 miles went quickly but then we were passing through the traffic separation zone so we had to dodge a few big ships.

After registering at the Port Royal Marina office we showered and headed out for dinner. We walked about a mile to Pitcher House Upper Deck for dinner, drinks, and Padres baseball. I had the pizza, Carolyn had the burger. Coors Light was enjoyed by all at the low, low price of $3. After watching the Padres play poorly, we headed back to the marina. About 100 yards from our boat the Cheesecake Factory was kind enough to put one of their establishments. We stopped for a decadent slice of cheesecake, another beer, and some fun people watching. After that, it was off to bed for us.

Carolyn and I will be in Redondo Beach until at least Tuesday. The plan is to wait here until the weather (wind) is right for the 20 mile sail across Santa Monica Bay to Paradise Cove. We will anchor there before rounding Point Dume (pronounced: Point Doom) heading to either Channel Islands Harbor (Oxnard) or Ventura Harbor. Next stop after that is Santa Barbara. Point Conception is getting bigger on the horizon.