Today is Monday. Carolyn and I rounded the rocky, rugged, and undeveloped west end of Catalina headed for Catalina Harbor on the south side of the island. We started early - early for us is 8:30 - and pulled into our mooring at Two Harbors at five till noon. After a quick lunch of Mac and cheese with hot dogs - because five year old cuisine doesn't require refrigeration - we pumped up the dinghy and rowed to shore to explore Two Harbors and have a few $8 beers at the only restaurant and bar in town. Today is Monday and it doesn't suck because I was drinking beer in the sun at 2pm. 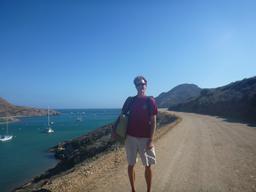 Catalina Harbor does not have its own town but instead shares the town of Two Harbors with Isthmus Harbor about a half mile walk to the North side of the island. It's a small tourist town and was not busy when we arrived. There were trucks hauling gear for campers and backpackers hauling their own gear in the center of The main Street when we arrived. There is only one store, the General Store, one restaurant, Harbor Reef Restaurant and Bar, and one hotel with 12 rooms. 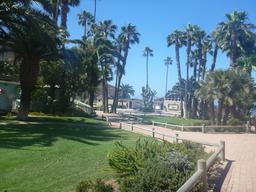 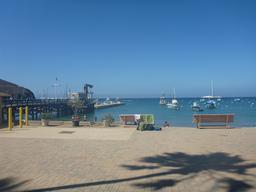 How we got here...after leaving Avalon on Wednesday we headed west and ended up in hen Rock Cove for two nights at anchor which was uneventful except for Sal the Significant Sea Lion. We left Sal's cove on Friday and headed West again for a fresh weekend view. Completely by chance Crazy Love took us to Big Geiger Cove which is leased by the great folks of the Blue Water Cruising Club. Completely by chance, the Blue Water Cruising Club was having a weekend long 'Invade the Isthmus' event and were expecting a decent number of folks to anchor in their cove. We arrived before most of the club arrived - we were the second boat in the anchorage - and we anchored bow and stern - as our cruising guide suggested - so the folks that showed up later didn't mind Carolyn and I invading their space. Over the course of the weekend we met a few of the club members. We even got a dinghy ride to shore and a tour of the 'Private No Trespassing' shore facilities. The fine people of the Blue Water Cruising Club were generous with their space, had great advice for our Crazy Plan, and have crazy anchoring skills that I hope to have one day. 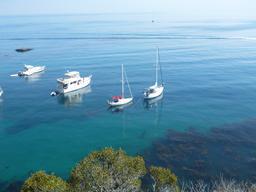 Both evenings in Big Geiger cove I was woken by Sal's cousin Sally who was not interested in boarding. She was merely cruising the fishing grounds on the outskirts of the anchorage for a snack. Sally was a much more significant sea lion than Sal so my theory is that she knew she was too big to jump (do sea lions jump?) from the water to the boat which involves ducking under lifelines that are 10 inches off the deck. 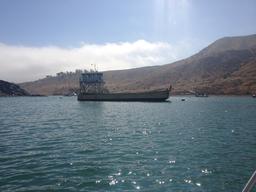 Anyhow, Carolyn and I are moored in a very empty Cat Harbor next to the Island Supplier - I always wondered how stuff gets to the island - and plan to stay here until Thursday when we, weather permitting, will continue our circumnavigation of Santa Catalina Island. 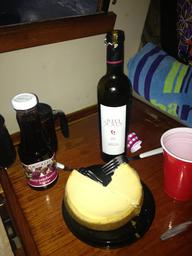