During our last day in Avalon, Carolyn and I went for a beautiful and challenging hike in the hills. We hiked the Hermit Gulch trail and the Lone Tree trail. 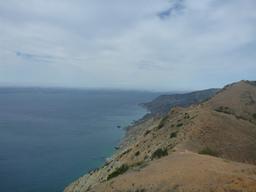 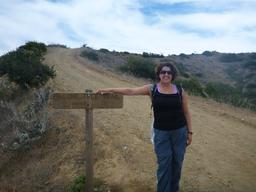 After the hike we headed to - from what we could tell - is the best happy hour on the island at Sandtrap. $2 beers and $1 tacos, not a bad deal for Avalon or anywhere in SoCal for that matter.

On Wednesday morning we decided to head for an anchorage between Avalon and Long Point. While leaving the mooring, I put the engine in gear before the mooring line had completely sunk to the bottom and the line wrapped around the prop and caused the engine to stall. Ugh! Fortunately, we have experience dealing with situations just like this. Unfortunately, It was a cold, overcast morning and I got to go for a swim. It took about 15 minutes to unwrap the line from the prop and we were finally on our way out of Avalon. Lesson learned. 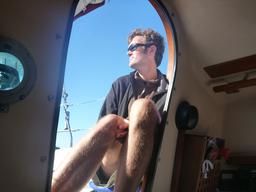 We headed West to pick out a nice anchorage to spend the next few days. We settled on Hen Rock Cove, a protected, calm, and uncrowded spot for our first open water anchorage. There was some interesting sea life in the area. In particular, there was a sea lion that we called Sal the Significant Sea Lion. He woke us up about midnight with a loud thump to our hull. I slept through it and Carolyn heard Sal's noisy retreat. She assumed he had run into the boat on accident. We heard another thump a few minutes later and realized he was trying to come aboard. Carolyn and I normally sleep with the cabin open (for fresh air) so I quickly ran into the cockpit to grab the hatch boards and close us into the cabin in case Sal was successful. Several thumps later, Sal was still not aboard. We could hear him circling the boat, trying to decide how he could board, but he never made it. In the morning we were surprised to note that our hull was not dented, however Sal had left a few marks that cleaned off easily. 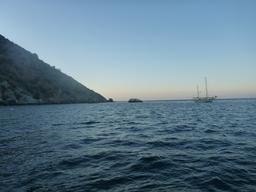 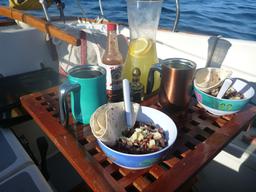 Tomorrow we head to a new anchorage, we're thinking Ripper's Cove, to get a new view on the island and attempt our first bow and stern anchoring.