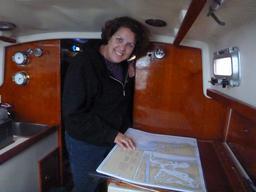 The forecast for today was South 10kt with gusts to 15kt in the afternoon and the forecast was right. We weren't just broad reaching, we were glorious, glorious broad reaching. I just invented a new point of sail but I think it is warranted. It was an amazing day's sail and a regular sailing term just doesn't describe it appropriately. I should probably explain.

Oceanside is 22 (or so) miles North of Mission Bay. The "regular" wind in Southern California blows from the Northwest starting at about noon and dies soon after sunset. A NW wind would have made today's trip much longer and much, much more tiring because we would have been beating into the wind and waves. The actual winds today were blowing from the South by 8am and stayed until long after we arrived in Oceanside. Carolyn and I managed to sail out of the anchorage in Mission Bay at 9:20am in skies so overcast we were expecting rain. The rain never came and though the skies over the mainland were cloudy, we had perfect blue skies by 11am. We broad reached at 5+ knots (very fast for us!) until we pulled into Oceanside Harbor at 3:20pm. Carolyn even napped while I sat at the tiller - don't feel sorry for me, I was in heaven. 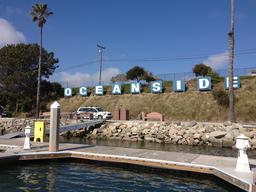 We docked at the "Visitor's Check In" slip and Carolyn went to pay our slip fees while I pumped out the holding tank. By the time we moved to our assigned slip, secured the boat, and cleaned up all the lines it was beer o'clock. We went for a walk to find some brew, but the liquor store/deli at the harbor had only pedestrian beer. Yelp told us that Pappy's Market had the good beer and was only a half mile walk. Sweet! 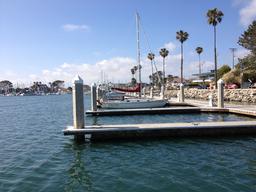 An hour later we were back at the boat with a six pack of Avery Ellie's Brown Ale, a 22oz pale ale from Mother Earth, and a 5lb bag of ice. For dinner I made pasta with mushrooms and TVP in tomato sauce. Good food, good beer, and great sailing makes for a better than most sort of Monday.

Carolyn and I will be in Oceanside until at least Wednesday, then we will move on to Dana Point for a few days until we head to Avalon.